Leslie Palceski is an American businesswoman who got celebrity recognition as the wife of Bobby Hurley, an NBA-player-turned-coach. Her husband is the current head coach of the Arizona State men's team and has previously coached the University at Buffalo.

Leslie back in 2020 hit the international headline, alleging athletic director, Ray Anderson of covering up sexual harassment by athletics booster. In an email exchange, her husband expressed his displeasure with Anderson's behavior calling it “disturbing,” Anderson responded to Hurley’s email, claiming the accusations “false and baseless.” How did the case conclude?

Read this full article to know about Leslie Hurley, her married life, and many more. SCROLL DOWN!!

Leslie Hurley is married to Bobby Hurley for a long time now. This 2021hu the couple will be celebrating their twenty-six years of marriage.

Leslie Hurley met Bobby a few months after Bobby's car accident on December 12, 1993, while he was playing for the Sacramento Kings. At the time Bobby's brother Dan was going to Seton Hall and he would drive up to see him a couple of times a week, and that’s Bobby met Leslie, who was a student there too.

"If I hadn’t had that accident, I might have still been out in California playing. But it gave me my family. As bad as it was for my basketball career and as painful as it was to go through, something good came out of it," Bobby said.

After dating for over a year, the couple tied the knot in a secret ceremony on 2nd November 1995. 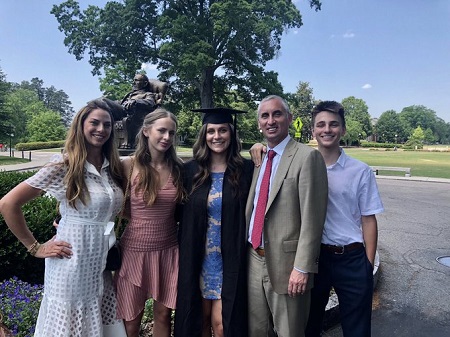 Both of their daughters are already college graduates: Sydney from the Arizona State University, earning a degree-sports business & marketing in 2020, and Cameron from Duke in 2018. Likewise, their son is enrolling in a school.

Later, ASU spokesperson said in a statement to Arizona Sports, “This matter has been fully investigated and resolved.”  Further, Hurley himself  released his own statement to The Athletic’s Doug Haller via Twitter, Statement from Arizona State basketball coach Bobby Hurley:

“My relationship with Athletic Director Ray Anderson today is strong. We will work together, alongside my outstanding coaching staff, toward the continued success of Sun Devil Men’s Basketball.”

Leslie Hurley is a businesswoman with a decent net worth. Further, she shares a tremendous net worth of $8 million with her husband, Bobby Hurley.

Mr. and Mrs. owned a Devil Eleven Farm in Ocala, Florida. In 2010, the couple faced foreclosure for non-payment of $3 million in loans to PNC Bank.