Madison Oberg Wentz is the wife of an American professional footballer, Carson Wentz, who plays as a quarterback for an NFL team the Indianapolis Colts.

Oberg married the Colts no 11, Carson Wentz at the Lake House Inn in Bucks County, Pennsylvania on July 16, 2018.

As heavy states, Oberg started dating Wentz sometime in 2017. This was assumed on the fact that she had made her debut on the footballer's Instagram account in December 2017. This was right after he had surgery on his ACL. While sources are unaware of the fact as to when the couple started dating, it is believed the two met on a mission trip in Haiti in 2017. Reports also speculated the pair had spent the Christmas holiday right after their mission. 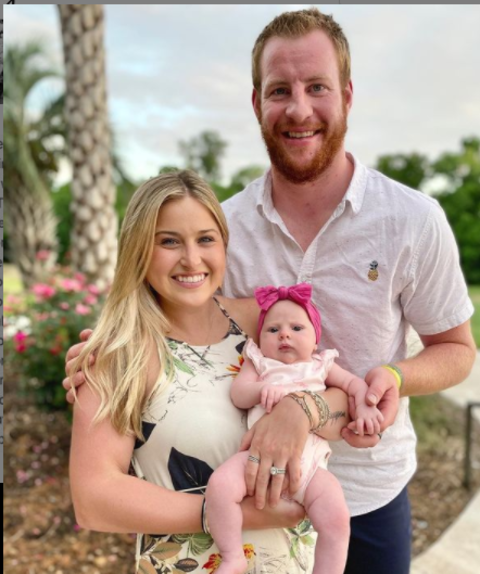 The couple's romance became public knowledge after Wentz hosted teammates for a Thanksgiving Day dinner in 2017.

Wentz proposed Oberg on February 6, 2018, two days after his then team, the Philadelphia Eagles had won the Super Bowl LII. The six-foot-five quarterbacks took to his Instagram to set forth the moment with a caption, " She said YES! And now Maddie and I both got us a ring,” pointing out his new Super Bowl ring.

“Can’t wait to marry my best friend! God is doing some amazing things and I can’t thank him enough."

Their Instagram activities post the nuptials suggest they spent their honeymoon in Greece. One imaging from their first trip (as a husband and the wife) shows the two got matching tattoos that say "agape," a Greek word that means "expresses unconditional love."

Together, they share a daughter named Hadley Jayne, born, April 27, 2020. Oberg's husband Carson was previously in a relationship with his high school sweetheart, Melissa Uhrich. He though never revealed when and why he broke up with Uhrich. Fans ruled the relationship had ended when they saw Wentz removing all of Uhrich's photos from his Instagram account at some point in 2017.

Madison Oberg Net Worth and Life Before Carson Wentz

Oberg's an intern at a non-profit organization called Mission of Hope, wherefore the discussion regarding her net worth is a bit complicated subject matter. Also, unlike her husband, she hardly appears for tabloids and such. Her organization is based in Cedar Park, Texas. 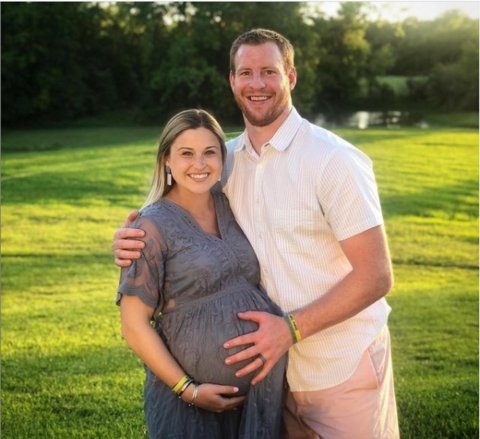 How Kansas City Chiefs' quarterback, Patrick Mahomes met his wife, Brittany Mathews; what is her net worth?

Nevertheless, she sure can be considered financially stable given her husband's million-dollar job. Their shared Christian values insinuate their marital ride is going to be pretty smooth and with the salary, the husband is receiving, their lifestyle shouldn't be far from that manner.