Brittany Mathews (fully Brittany Lynne Mathews) is more prominent as the fiancee of Kansas City Chiefs' quarterback, Patrick Mahomes. Independently, she is the owner of a successful personal training business that she founded around 2021.

Mathews was born on September 1, 1995, in Tyler, Texas. She played soccer for the women's team at the University of Texas at Tyler; Mathews has a bachelor's degree in Kinesiology. She attended Whitehouse High School in Whitehouse, Texas.

Mathews has been dating Pat Mahomes since her teenage years as the couple attended the same high school. The six-foot-three Chiefs' no 15 first approached Brittany by giving a rose and a Valentine's Day card at a cafeteria in 2012. They started dating the same year in March and later would become each other's prom dates. 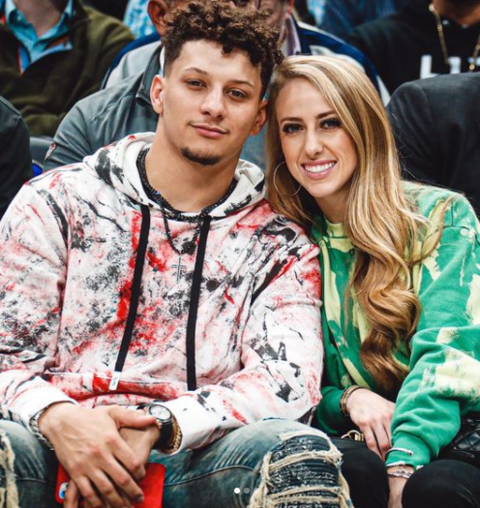 The couple got engaged on September 1, 2020. The Chiefs quarterback used his Super Bowl ring ceremony night to propose to Mathews just weeks before the start of the NFL season.

"9.1.2020. On a day that was meant to celebrate you, you turned it into celebrating us. It’s always us, it’s always you and me," wrote the 25-year-old former soccer player. "The words you looked into my eyes and said to me at this moment will NEVER leave my mind! You made this day perfect, you took my entire breath away and I could not have imagined anything better. I love you, forever and always! Cheers to spending our life together and an inseparable bond." 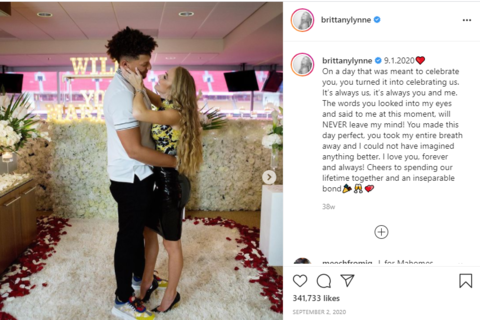 Together, they share a daughter, named Sterling Skye, born, February 21, 2021. The family of three resides in Kansas City, Missouri.

Brittany Mathews Net Worth and Career

The precise projection to Mathews' net worth isn't an easy topic to delve into, unlike her better half, Mahomes' lucrative financial details. She though has made a name as a successful businesswoman over the past few years.

With her beau, she seems very much likely to be have been enjoying a financially secured lifestyle. And that's pretty much evident looking at their private jet, a boat, and vacations in exotic locations. 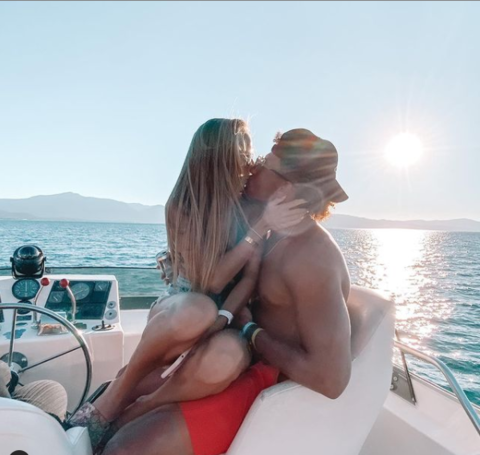 Even her engagement ring is worth hundreds of thousands of dollars with reports stating the 8-10 carat emerald cut diamond (set on a white gold or platinum diamond-adorned double band) to be in the range of $350,000 to $800,000. Her "mom car," a Lamborghini SUV gifted by her footballer fiance, according to TMZ, has a plausible price tag of more than $200,000.

Along with Mahomes, she is also a co-owner with companies like bio steel sports and balance athletica. Her ownership of an NWSL team in KC also deserves a mention as it also might very well be contributing to her growing net worth. She also shares a home with her boyfriend in Kansas City worth nearly $2 million, bought in May 2019.

Considering her ventures, it should be safe to construe Mathews rakes in a yearly revenue of more than $1 million.

Mathews's decision to play collegiate soccer was rather a last thought. This was despite her being White House High School's offensive MVP and a first-team all-district selection. As a freshman at the University of Texas, she scored six goals in her first 36 games, and two in her sophomore year.

In her junior year, she recorded seven goals and seven assists. She scored 13 goals including four hat tricks as a senior. During her spell at the UT Tyler, she scored 31 goals, 16 assists and led her team to a 56-13-5 record. After graduating, she joined a contract with the Icelandic pro team UMF Afturelding/Fram.

As of present times, she runs her own personal training business called Brittany Lynne Fitness. She explains she is more passionate about training than playing soccer.