Liam Walsh is a well-known British professional boxer. He has been fighting at the professional level since 2008. He is the former Commonwealth super-featherweight titleholder from 2010 to 2017, which remains the longest titleholder. Liam is the current WBO European lightweight champion and has been holding it since 2019.

Liam Walsh was born on May 18, 1986, in Rochdale, Greater Manchester. He is among the children born to Michelle Walsh and her husband, John Walsh. He has twin brothers, Ryan and elder brother Michael, the biggest supporter and a boxer. Their father passed away in 2011. Walsh stands five feet and eight inches tall and weighs 59 kgs.

How Rich is Liam Walsh? Know His Net Worth, Career Earnings, and Prize Money

Walsh must have accumulated a considerable sum from his successful boxing career. He has been fighting for more than ten years at the professional level. Liam Walsh has an estimated net worth of $200,000. 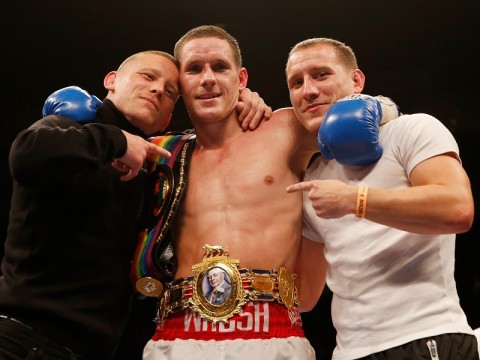 CAPTION: Liam along with his brother and Commonwealth Champion Title SOURCE: MTK Global

Liam Walsh is living a very private life. He has not shared a single word about his relationship status. Also, He has not been found dating anyone. The exact relationship status of Liam is not known. Walsh could be single, dating, or married. The British fighter likes to spend his free time training in the gym and with his family.

Liam started his professional career in 2008. He made his debut against Daniel Thorpe. He won the match in the very first round via a KO. Shortly after his debut, The boxer had his second match against Johnny Greaves. He won this match in the fourth round via a KO. In between 2009 and 2010, He fought in more than five games which he won via KO.

At the end of the 2010 season, Walsh got his first title match of vacant Commonwealth super-feather title against Maxwell Awuku. He won the match via unanimous decision. In 2011, The British fighter successfully retained his title in two matches. In the following season, Liam won the vacant WBO European lightweight title against Domenico Urbano.

In 2017, Walsh was challenged for the IBF super-featherweight title against Gervonta Davia. Liam lost the very first professional match of his career via a TKO in the 3rd round and lost the title match. This remains the only match he has lost to date. The British boxer has played twenty-three games and won fifteen via TKO out of twenty-two. Since 2019, Liam has not stepped into the ring.