Robert Sarver has been scrutinized for his actions and was banned from NBA and WNBA for a year. What's more, the owner of Phoenix Suns and Phoenix Mercury was fined ten million by the NBA. How does his wife Penny Sanders feel about it? Well, she keeps herself away from the media, so her views on the sandals of her husband stay a mystery for now.

Speaking about Sarver's wife, Penny came to fame through her husband. And the celebrity wife stays out of the spotlight. And she mostly likes to lead a low-key life out of the media's reach.

Penny Sanders Graduated From The University of Oklahoma!

Robert Sarver's wife holds a bachelor's degree, and Penny Sanders graduated in 1990 from The University of Oklahoma! Besides, the celebrity wife grew up in Kansas City. But, most of Penny's early life remains a mystery, including her family, schools, and other things. 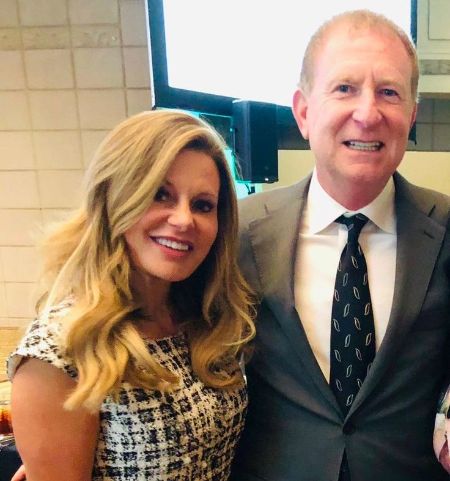 Penny Sanders and Robert Sarver, her husband, took a picture together. SOURCE: Pinterest

After finishing college, Sanders moved to Phoenix and found a job to support herself. And Penny had to market textbooks to universities. And the following year of her move to Phoenix, Penny and Sarver would meet for the first time in 1991.

And Sanders would go on and stay out of the spotlight till she tied the knot with Robert. So, from the year 1991 to 1996, Penny became virtually invisible. Also, since there weren't any social media at the time, it was much easier for Sanders to remain out of public view.

Penny Sanders and Her Husband had known each other for five years before the marriage!

Marriage is a big step for any man or woman, and knowing your partner is crucial for the relationship to be lasting. And so, Penny Sanders and Robert Sarver courted each other for five long years before jumping the gun. Robert Sarver and his family at a basketball game. SOURCE: Yahoo!News

On November 2nd, 1996, Penny and Robert exchanged their wedding vows. Not liking the major spotlight, Sanders and Sarver married in an intimate ceremony. Likewise, only their closest friends and family attend the couple's big day.

Over their long married life, the businessman and his wife gave birth to three kids. Although the kids gained instant fame as the children of Robert, all three of Sarver's sons lead a life out of the spotlight. Penny and her husband named their kids Max Sarver, Jake Sarver, and Zach Sarver.

Although recently, Robert's gained a massive backlash from his actions at work, the man stayed loyal to his wife. And so, Sarver and Penny remain free of any extramarital affairs. Likewise, no news about the married couple's divorce or separation has surfaced.

By now, almost everyone on this planet has heard about Robert Sarver's debacle. His racist and sexist point beliefs have gotten Sarver banned and fined by the NBA.

In September 2022, the NBA suspended Robert for a year or a season. Similarly, the Phoenix Suns and Phoenix Mercury owner was fined $10 million by the sports organization.

More on Sarver's suspension, the businessman was found saying the "N-Word" several times. Likewise, the Basketball team owner also made sexual and inappropriate comments to his female employees. The NBA decided to look into the situation in November of 2021, and a year later, Sarver was only suspended for a single year and fined ten million.

Sarver's Ten million fine didn't even dent his net worth. How rich are Penny Sanders and Her Husband?

NBA recently fined Phoenix Suns owner ten million. And the fine didn't even leave a scratch on Penny Sanders and her husband, Robert Sarver's Net Worth! Sarver currently owns a total asset worth around $800 million. 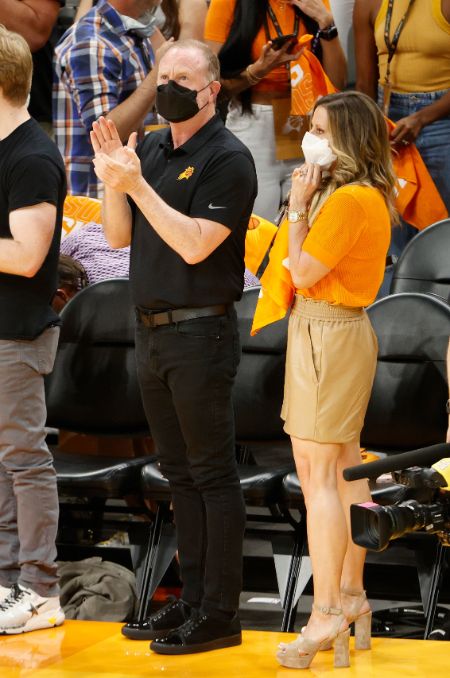 Penny Sanders and her husband Robert Sarver at a match. SOURCE: The Sun

And sharing her husband's wealth, Penny also holds millions upon millions in her bank account. Likewise, Sanders has an estimated $20 million net worth. Besides enjoying a luxurious life, Penny and the father of her children also involve themselves in many charity events.