Rajon Rondo is an American professional Basketball player who plays in the National Basketball Association (NBA). Rondo currently plays for the Los Angeles Lakers as their Point Guard.

As a Point Guard, Rajon Pierre Rondo reportedly earns around $9 million as his yearly salary from Los Angeles Lakers and has an estimated net worth of over $35 million. He is currently in a relationship with his partner Ashley Bachelor and is also a father of two kids.

Rajon Rondo's Net Worth and Salary

As of 2019, Rajon Pierre Rondo has an estimated net worth of over $35 million. He is a veteran of the sports and has won an NBA championship ring as such it is understandable that he has been able to establish a huge net worth for himself.

He is currently signed a one-year, $9 million worth contract with the Los Angeles Lakers which keeps his salary at $9 million till the end of this season. Furthermore, his total NBA career earnings are recorded at $97,622,794.

Furthermore, he owns a million-dollar mansion in Louisville, Kentucky (KY), US.

Personal Life of Rajon Rondo and his Girlfriend

Rajon Rondo is currently in a relationship with Ashley Bachelor. Though rumors have floated around of Ashley being his wife, there is no record of Rondo being married and the two are only partners at the moment. 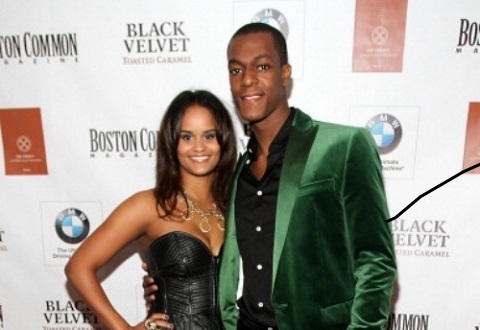 Recently, a woman filed a complaint against him and his wife for beating her in a “heated parking lot dispute,”.

Rajon Pierre Rondo was born on February 22, 1986, in Louisville, Kentucky to parents William Rondo and Amber Rondo. As per his nationality, he is American and belongs to the Afro-American ethnic group. He has two brothers, Anton Rondo, William Rondo, and a sister named Dymon Rondo.

Rondo enrolled at the University of Kentucky and played for the Kentucky Wildcats. He only played two seasons with of college basketball and forewent the remaining season to enter the 2006 NBA draft.

The Phoenix Suns drafted Rajon Rondo with their 21st pick overall in the 2006 NBA draft and traded him to the Boston Celtics along with Brian Grant for the Cleveland Cavaliers' first-round draft pick in the 2007 NBA draft.

The Celtics traded Rajon Rondo and Dwight Powell to the Dallas Mavericks on December 18, 2014, in exchange for Jae Crowder, Jameer Nelson, and  Brandan Wright,

Rajon Rondo signed a one-year $10 million contract with the Sacramento Kings for the 2015-16 season. After his contract ended with the Kings, He was signed by the Chicago Bulls for the 2016-17 season and later by the New Orleans Pelicans for the 2017-18 season.

In 2018, Los Angeles Lakers added Rajon Rondo to their roster signing him to a one-year $9 million contract. He was added to further help develop Lonzo Ball's game as a point guard.