Lamon Tahuan Brewster a.k.a. Lamon Brewster is an American retired boxer who competed professionally from 1995 to 2010. He is best known for scoring an upset KO win over Wladimir Klitschko to win The WBO heavyweight title which he held from 2004 to 2006. Further, BoxRec ranked him #8 in the worlds heavyweight in late 2004.

Indianapolis, Indiana native, Lamon Brewster was born on 5th June 1973, under the star sign Gemini. He holds an American nationality and is of white ethnic background. He is the cousin of former IBF and WBO heavyweight champion Chris Byrd.

Lamon Brewster's Earning From Boxing & Net Worth In 2021

Compiling a record of (35-6, 30 Ko), Lamon Brewster has earned a tremendous sum of money through his boxing career. As of 2021, his net worth is approximately $5 million. However, there is no financial data on how much he made per fight or his highest purse.

Lamon Brewster has married twice in his life. He first tied the knot with Tichina Arnold, an American actress, comedian, and singer. The couple divorced in 1994.

Lamon Brewster with his wife and children SOURCE: MyBoxingFans

In October 2000, Brewster remarried his Juana Brewster. The couple shares two daughters and a son. Besides, Brewster also has one older daughter from a previous relationship.

On 8th November 1996, Kamon Brewster made his professional debut against Moses Harris. He won the fight via KO in round one. However, it took him 26 fights, 24-2-0 (win-loss-draw) to in his career's first title, WBO-NABO heavyweight title on 2nd February 2002. To have the honor, he knocks out Nate Jones in round three. On 14th December 2002, he won the vacant WBC Continental Americas heavyweight title and also retained WBO–NABO heavyweight title, defeating Tommy Martin. 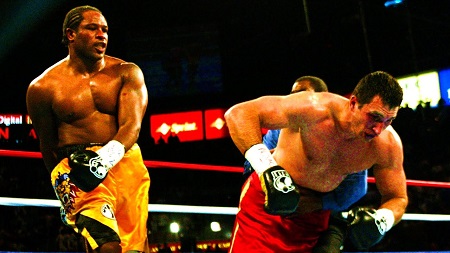 On 20th August 2008, he won WBA-NABA heavyweight title, knocking Danny Vatcheder in the 5th round. Later that he fight, he had 1 win and two losses.

On January 9, 2011, Lamon Brewster officially announced his retirement as a professional boxer.