How Much Is Wladimir Klitschko's Net Worth?

Back in 2017, he was ranked #98th in the world, highest-paid athletes. That year, he summoned $17.5 million as a salary/winning and $4 million from endorsements. During his peak career, he was sponsored by Deutsche Telekom, Porsche Automobil Holding, and SAP.

He owns a 4,800 sq.ft. penthouse in Hollywood, Florida (FL), US. In 2018, Wladimir and his ex-finacee Hayden Panettiere listed their Nashville Home for $1.65 million. The real estate property features a four-bed and five-bath that covers 4937-square-foot.

During a charitable auction in Kiev, Ukraine, Klitschko, on 29 March 2012, auctioned off his 1996 Olympic gold medal to a customer who bid $1 million.

Shared A Daughter With Hayden Panettiere

Klitschko and American actress Hayden Panettiere started dating since 2009. Panettiere made her apperance in ringside at some of Klitschko's bouts, including at Klitschko's 10th-round KO win against Samuel Peter. In 2011, the duo separated for a short period of time but reconciled in 2013. 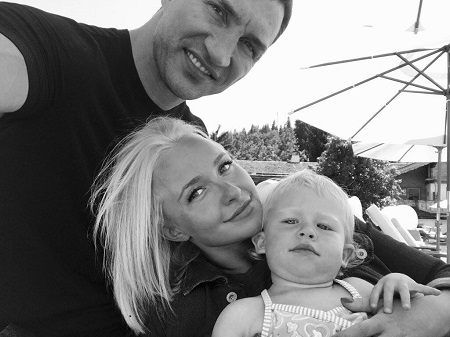 That same year in October, the couple got engaged. In December 2014, the Klitschko and Panettiere welcomed their first child, a daughter. In August 2018, the couple parted way for a second time. As reported, Panettiere's mother, Lesley Vogel, the couple is on good terms for the sake of their daughter.

Klitschko's father, Vladimir Rodionovic Klitschko, was a Soviet Air Force major general and military attache of Ukraine in Germany who was also one of the commanders in charge of cleaning up the effects of the Chernobyl disaster in 1986. Afterward, Vladimir was diagnosed with cancer who died in 2011. On the other hand, his mother, Nadezhda Ulyanovna is a homemaker.

He was raised alongside his younger brother Vitali Klitschko, a former WBC, WBO, and Ring magazine heavyweight champion. Further, he is the current Mayor of Kiev.