Christopher Cornelius Byrd a.k.a. Chris Byrd is an American retired boxer who competed professionally from 1993 to 2009. During his tenure, he held 2X world heavyweight champion. He has his first WBO title in 2000 defeating Vitali Klitschko. Later two years, he defeated Evander Holyfield to win the IBF heavyweight title for his second reign as world champion.

Flint, Michigan native, Chris Byrd was born on 15th August 1970, under the star sign Leo. He holds an American nationality and is of Afro-American ethnic background. Youngest of eight children, all five brothers boxed and so did one sister was into boxing: his dad was a trainer and his mother was an assistant trainer. He stands 6 ft (183 cm) tall.

As of 2021, Chris Byrd has an estimated net worth of $5 million. Reportedly, he made over $10 million in the ring during his 16 years long tenure as a boxer. However, there is no exact information on how much Chris earned on average from each fight or his highest purse.

Besides, there is no information about Byrd's real estate property, vechiles, or any other income-generating business.

Chris Byrd's Wife? Is He Married

Chris Byrd is married to Tracy Byrd for a long time now. The duo started dating when Chris was 17, tied the knot at  23,  in 1993, in a secret ceremony. Since, Tracy has been the business manager for former 2X Heavyweight Champion and now motivational speaker, Chris Byrd. 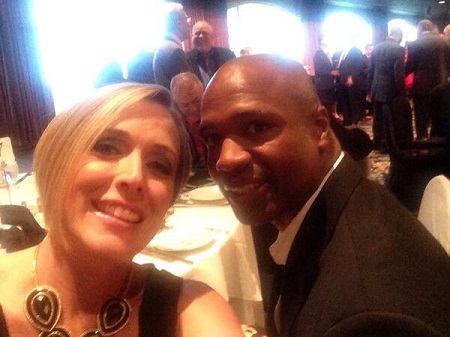 Not only in his professional journey but Chris' wife held his hand and walked him with her to turned him spiritual. Chris said, "Going was the starting point and the real turning point was when I gave my life to Christ."

The Byrds are parents to three children: son Justin, and daughters Jordan and Sydney. The family is living a blissful life.

On 28th January 1993, Chris Byrd made his professional debut against Gary Smith at IMA Sports Arena, Flint, Michigan. He won the fight via UB in round six. Following his thirty wins, on 1st April 2000, he won his career's first title, WBO heavyweight title against Vitali Klitschko. In the next fight, he lost the title against Wladimir Klitschko on 14th October 2000.

Rebounding from the loss, he returns to fight on 19th January 2001, where he lost to David Vedder. On 12th May 2001, he won USBA heavyweight title fighting against David Vedder via unanimous decision. He retained the title in the following bout against David Tua.

On 22nd April 2006, he lost IBF heavyweight title against Wladimir Klitschko. After the bout, he had two wins and two-loss and officially retired from boxing in 2010.