News Khabib Issues Warning Over Justin Gaethje Ahead OF UFC 254, Is Conor In The Mix?

Khabib Issues Warning Over Justin Gaethje Ahead OF UFC 254, Is Conor In The Mix?

Tragedy struck Lightweight King Khabib Normagomadove is set to fight the current Interim champion Justin Gaethje in September at the UFC 254. Despite UFC's decision to leave Khabib on his own, the eagle has shown interest in testing his limits against the number one contender who recently won Tony Furgeson in a dominant fashion.

'Take him to the deepest ocean and drown him'

Ahead of UFC 254, Lightweight Unification Showdown, the UFC commentator Joe Rogan had posted an IG video where 'savage' Justin Gaethje and his coach Trevor Whitman were seen going through an extreme practice session ahead of UFC 254. The video gained all the attention of the current king Nurmagomedov and compelled him to issue a warning over to Justin.

In reply, the Eagle Normagomedov wrote:

"Justin is a very nice guy and good opponent for me, but when octagon close he has to be ready not only boxing match, I’m not Dustin or Tony, I will take him to the deepest ocean and drown him" 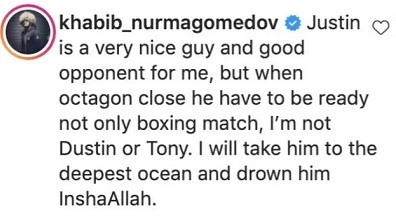 Where Is Conor McGregor in the mix?

Whenever he gets an opportunity, Conor kind of slides into the Mix! This time it was on Joe Rogan's post! Conor slide in and said:

“In other words, I’m going to be running around the outside of the octagon s****** my pants. And within the first 10 seconds of the fight, I’m diving at his legs for a good whiff of his jockstrap.”

The comment he passed to Khabib was for his wrestling centric game. Conor seems desperate to register a "W" over Khabib since October 2018 and is now hoping for a rematch.

People even thought he'd challenge Gaethje for an interim title, with the winner facing Khabib later this year, but as Justin has won over Tony, he has rightfully won the shot at the title.