Kentavious Caldwell-Pope is an American professional Basketball Player player who plays in the National Basketball Association (NBA). As of 2019, Kentavious currently plays for the Los Angeles Lakers as their Shooting guard. Kentavious has played for the teams Detroit Pistons.

As a Shooting guard, Kentavious reportedly earns around $12,000,000 as his yearly salary from Los Angeles Lakers.

Kentavious Caldwell-Pope Net Worth and Salary

Kentavious so far has made earnings of $41,741,533 from his entire NBA career. Moreover, he is the second highest paid player of L.A. Lakers followed by Rajon Rondo with LeBron James being the highest paid with the salary of $35,654,150.

The Famous NBA star is 6 feet 5 inch in height and weighs around 93 kg. Kentavious is not only a world-class athlete but also has a very attractive individual.

Caldwell is married to McKenzie Caldwell-Pope. The couple met in Dallas, Texas, while Caldwell-Pope was playing for the Detroit Pistons.

Mckenzie has a son named Kenzo from her earlier relationship, who was only one when the couple started dating. The couple later welcomed a son in 2017 named Ken Jr.

Kentavious was born on February 18, 1993, in Thomaston, Georgia to parents Lawrance Pope and Rhonda Caldwell. As per his nationality, he is American and belongs to the Afro-American ethnic group. Further, his star sign is Aquarius.

Kentavious, in his high school career, held an average of 31 points and 8.2 rebounds. After completing high school, Kentavious enrolled at the University of Georgia and played for the Georgia Bulldogs basketball.

Caldwell-Pope was selected by the Detroit Pistons on 27 June 2013 with the eighth overall pick in the 2013 NBA draft. He later joined the Pistons for the 2013 NBA Summer League and signed his contract with the team on 19 July.

He was associated with Detriot Pistons from the year 2013 to 2017. Later on July 7, 2017, Caldwell was declared as a free agent by renouncing his position in the team. 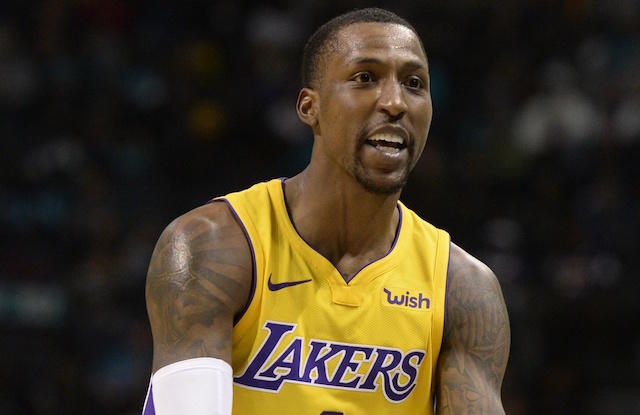 His career stats are:

On 6 July 2018, Caldwell-Pope re-signed a $ 12 million contract with the Lakers for one year and is playing along with the team-mates LeBron James, Lonzo ball.