Gossip 33 Year old Player LeBron James' Net worth through his playing career; Properties owned by him

33 Year old Player LeBron James' Net worth through his playing career; Properties owned by him

NBA career blessings have led the players to earn monstrous economic benefit and fame. Today, we are talking about the 33-year-old NBA star LeBron James who currently plays for the Cleveland Cavaliers earning million dollars fortune with his endorsement and contracts. With his career height, the jersey number 23 Cavaliers' freak, James is estimated to be enjoying the net worth of $400 million.

Well only with his contract-salary, James reportedly has earned $233,893,001. So, how much salary LeBron James earns? Curious about his contracts and endorsement deals? Scroll down.

Net worth and Salary of LeBron James

With his 15 seasons in the NBA, alongside lucrative endorsements and sponsorships, James is estimated to be enjoying the net worth of $400 million as of 2018. Back in 2016, as per The Richest,  his estimated net worth was reported to be $340 million which got a drastic rise after signing $100 million contracts with Cavaliers that year.

For the culture! S/O my folks in the “305”. Always love forever! #LeBronWatch “South Beach”

As reported, LeBron James is projected to earn the annual salary of $35.6 million in the 2018 season, second behind Stephen Curry who will earn $37.45 million this season.

Though, the off-court earnings make him the highest earnings NBA player with the overall of $85.3 million after the legendary player Michael Jordan.

The member of the United States National Basketball Team, James initially played for the St. Vincent-St. Mary high school where he played till 2003 making himself on the wishlist of many NBA teams.

Then on June 26, 2003, he was selected by his hometown team Cleveland Cavaliers in the 2003 NBA Draft leading his first professional contract worth $12.9 million signing for 3-years on July 3, 2003.

Then July 9, 2010, soon after signing a $100 million contract for 6 years with Cavaliers, LeBron James was traded to Miami Heat as a part of sign-and-trade for a 2011 2nd round pick, 2 future 1st round picks, and a future 2nd round pick.

Though after 4 seasons with the Miami Heat, he exercised Early Termination Option on June 25, 2014, to skip remaining years of the contract, and made his return to Cleveland Cavaliers on July 12, 2014, signing a 2-year contract worth $42.2 million.

BREAKING: LeBron James is signing with the Cleveland Cavaliers. (via @SInow) pic.twitter.com/x9mFMPbz3t

After declining the option bonus of $21.6 million and $24 million for the 2015 and 2016 season respectively, he became an unrestricted free agent.

And later on August 12, 2016, he signed a 3-year contract worth $100 million with Cleveland Cavaliers making him the third NBA player to earn $30 million in a season after Michael Jordan and Kobe Bryant in the 2016 season.

Before I go dark tomorrow night I wanted to leave you with some more #LEBRONWATCH Fire ???????????? This was one of my favorite colorways from this season so wanted to make sure you guys have a chance to get them. Stay tuned- Summer’18 #LetsGo #striveforgreatness?? #thekidfromakron???? #jamesgang?? #rwtw??

No recent news of James' contract extension is out yet, though his due contract with the average annual salary of $33.285 million will pay him $35.6 million for the 2018 season while carrying the cap hit and dead cap value of the same amount.

Take a look at his salary sheet till the 2015 season, compared with Chris Bosh and Dwyane Wade. 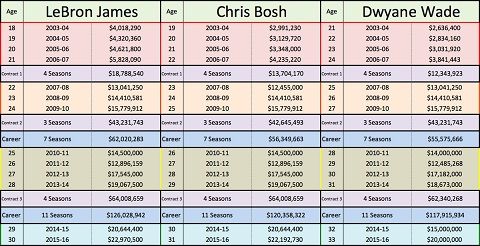 Well, reportedly his career earnings sum up the total of $233,893,001 in 15 seasons by the end of 2017. Though his contract and salary is not the one to shower millions for James, let's not forget about his endorsement deal.

Soon after graduating from High School, James endorsed Nike over the bid of endorsing Adidas, Reebok, and Nike for the approximation of $90 million. In 2014, James made a profit of more than $30 million as part of Apple's acquisition of Beats Electronics promotion. 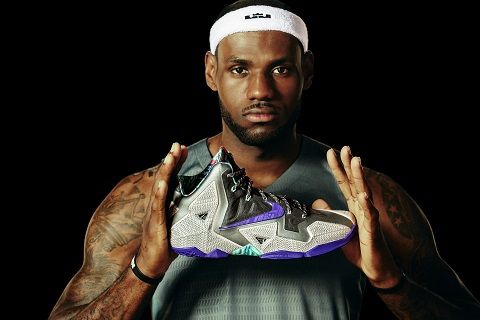 Then in 2015, James's digital video company, Uninterrupted, raised $15.8 million from Warner Bros. Entertainment and Turner Sports and was named the sixth highest earning sportsperson and later became the 3rd highest earning active player in 2016 after Lionel Messi and Cristiano Ronaldo.

Well,  with his huge income, LeBron seems to have expanded his property empire quite well. As reported, back in 2017, he purchased a house in Los Angeles in the neighborhood of Brentwood for the whopping amount of $23 million. 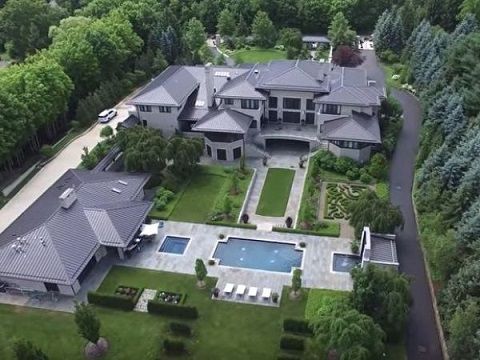 Probably, it not all for LeBron James. Let's wait for more.

LeBron James seems to be madly in love with luxury cars. Reportedly, his favorite cars are, Bentley Continental GT,  Lamborghini Aventador worth $670,000 and a Porsche 911 Turbo S which estimated to be worth $188,100.

Besides this, here is the long-list of LeBron's car collection:

And the surprising fact is that his madness in the watch is also notable, as James fond of Rolex Watches owns a collection with its estimated worth to be around $139,000.

In 2016, he donated $2.5 million to the Smithsonian National Museum of African American History and Culture to support an exhibit on Muhammad Ali. Also, he actively works for the awareness of racism too.

The combo of success and generosity, applause to LeBron James.