An American basketball player Lonzo Anderson Ball is better known as Lonzo Ball, who currently plays for the Los Angeles Lakers of the National Basketball Association as their point guard.

Lonzo currently earns $11,003,782 as his annual salary in 2021. He has an estimated net worth of about $10 million. He has a daughter, from a long-term relationship with Denise Garcia, his ex-girlfriend.

Lonzo Ball Net Worth, Salary, Contract, and Endorsement in 2021

Instead of signing with any of the 3 major apparel companies: Adidas, Nike or Under Armour, Ball signed to the Big Baller Brand, following his father.

In February 2018, the Lakers guard bought a condo worth $1.625 million at the Ritz-Carlton Residences at L.A. Live. The 1,700-square-foot unit consists of 2 bedrooms and 3 baths with access to a rooftop pool and city views.

Furthermore, with his dad, LaVar Ball, they own a 13,800-square-foot mansion with a 1,200-square-foot guest house in Chino Hills worth $5.2 million.

Lonzo Ball Girlfriend, Dating, and Personal Life; Who is he Dating?

21  of age, Lonzo Ball’s is neither in a relationship nor married; currently, he is single. He previously dated girlfriend Denise Garcia, a soccer player for UC Riverside. The lovebird met at Chino Hill High School. 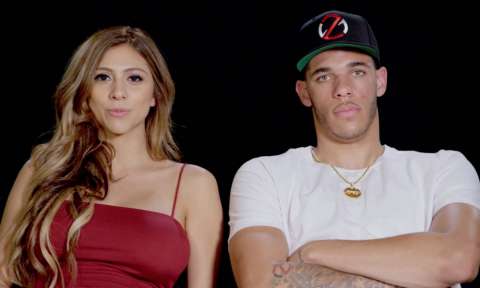 The couple has a child together named Zoey born in July 2018.

However, they later split up in the summer of 2018.

Apart from his love life, Ball is close to his family. In August 2017, he along with his family premiered on their Facebook Watch reality show called “Ball In The Family." The following month, he released his 1st rap single, “Melo Ball 1,” which is an ode to his brother, LaMelo. In October, he released another rap single titled “Super Saiyan,” a nod to the anime and managed series “Dragon Ball Z."

His two brothers currently signed Vytautas Prienai-Birstonas of the Lithuanian Basketball League, with the planning on making their professional debut in January 2018.

Lonzo Ball was born on 27th October 1997, in Anaheim, California, to Tina Ball and LaVar Ball, they are a former college basketball player. He raised alongside his siblings LaMelo and LiAngelo Ball. At the age of two, he started playing basketball. The three brothers played basketball together on a team coached by their father until they reached high school.

Talking about his nationality, Ball is an American, and he belongs to African ethnicity. His birth sign is Scorpio.

Ball enrolled at Chino Hills High School in Chino Hills, California. He's averaged 25 points, 5 steals, 5 blocks, 9.1 Assists and 11 rebounds in his junior year. Similarly, as a senior, he led the school to a 35-0 record as well as a state title.

In November 2015, Lonzo Ball signed a National Letter of Intent to enroll at the University of California, Los Angeles, and plays for the UCLA Bruins. In his first collegiate game against Pacific, Ball scored average 19 points, 8 rebounds, and 11 assists. In the Bruins’ regular-season finale, he had a career-high 14 assists in a 77-68 victory against Washington State.

He is listed with fellow NBA rookie Oscar Robertson, Art Williams, Connie Hawkins, Magic Jhonson, and Ben Simmons as the only player to record multiple triple-double within the fits 20 games of their NBA Careers.