Kellen Mond is a rising American football player. He is currently playing in the National football league for the Minnesota Vikings since 2021. The Vikings drafted him in the third round overall 66th pick. Mond plays as a quarterback for his team.

Kellen Mond was born Kellen Louis Mond on June 22, 1999, in San Antonio, Texas. He is the son of Kevin Mond and his wife. His father served in the U.S Army for eight years. Kellen graduated from IMF Academy and enrolled at Texas A&M University. Regarding his physical appearance, Mond stands six feet and three inches tall and weighs 96 kg.

Kellen Mond's Journey to the NFL

Kellen played numerous sports in High School. He started playing in the Reagan High School and then transferred to IMG Academy. In his senior year, Mond passed for 1,936 yards and 20 touchdowns and rushed for 775 yards and 18 touchdowns. Kellen was rated as a five-star recruit and was ranked as the number one dual-threat quarterback in his class. The player received numerous offers from universities and committed to play for Texas A&M University. Kellen tries to pass the ball towards his teammate SOURCE: Pioneer Press

Kellen did not get much chance in his first year, and he started as a  backup to Nick Starkel. In his freshman season, Mond appeared in ten games and had decent stats. In sophomore year, Kellen played in thirteen games as a starter was a key member of the team. In his junior year, The player could not keep up with the hype and had a decent season. The Aggies finished the 2020 season 9–1 and ranked fourth in the final AP Poll.

Kellen played in ten games in his senior year. He finished his career at Texas A&M as one of three SEC quarterbacks to record over 9,000 career passing yards with 1,500 rushing yards. Mond was part of the 2021 Senior Bowl and was named its most valuable player.

Kellen listed his name for the 2021 NFL draft. The Vikings drafted him in the third round with the 66th overall pick. The player has signed a four-year rookie contract with Minnesota. In the fourth quarter, he earned his debut against Green Bay Packers and completed two of three passes for five yards in the 37-10 loss.

Kellen is very much open about his relationship status. He is an active social media user, and following his timeline, we can be sure that Mond is dating his longtime girlfriend, Kiana Lashun. The love birds have been together for some time. 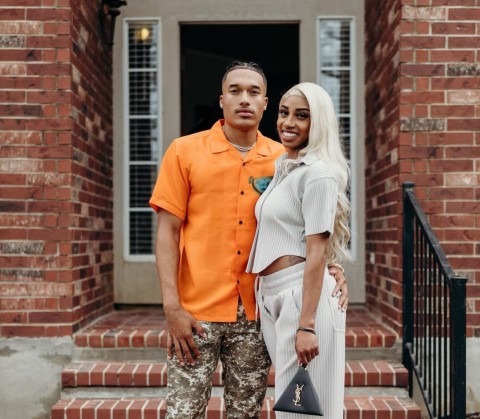 Both of them are very supportive of each other and keep sharing each other photos in their timeline. They are yet to get engaged or tie their wedding knot. Lashun completed her Master's Degree in Nutrition.