Ameer Abdullah is an American football running back who is currently signed to the Minnesota Vikings of the National Football League (NFL). He finished his collegiate career at Nebraska and was picked by the Detroit Lions in the second round of the 2015 NFL Draft.

Homewood, Alabama native, Ameer Abdullah was born on 13th June 1993, under the star sign Gemini. The twenty-seven years old holds an American nationality and belongs to the Afro-American ethnic background.

How Much Is Ameer Abdullah Net Worth In 2020?

In 2017, Ameer married his girlfriend Naillene Sarmiento, a nurse graduate of Unitek College after a whirlwind romance. they became engaged on September 8, 2017. The following year on September 8, they tied the knot in Los Angeles. 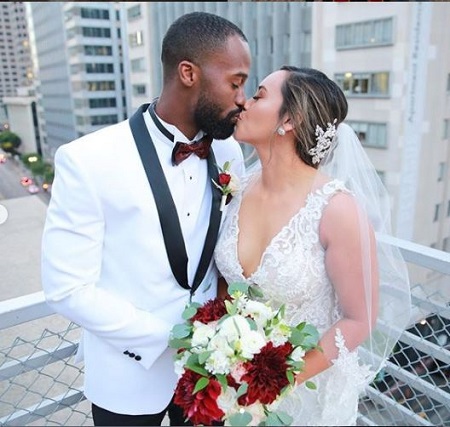 Previously, Ameer was in a high-profile relationship with Georgia Ellenwood, a successful college athlete at the University of Wisconsin. Stunning blonde Georgia is a Canadian athlete who has represented her country at the 2016 World Indoor Championships.

Ameer Abdullah is the youngest of nine children born to Kareem and Aisha Abdullah. He enrolled at Homewood High School, where he was the 2010 South region player of the year. He was a track star at Homewood and also competed in the long jump. Abdullah was offered football scholarships from several schools, but he chose the University of Nebraska–Lincoln. A devout Muslim, he majored in History.

At the 2015 NFL Draft, Abdullah was picked by the Detroit Lions in the second round with the 54th overall pick, becoming the fourth running back to be selected that year. He made his professional regular-season debut in Lion's season opener against the San Diego Chargers. After four seasons, he was waived by the team on November 6, 2018.