Matt Corral is a rising American football player. He is currently playing in the Southeastern Conference for the University of Mississippi. Matt plays as a quarterback for his team. Corrall was named the MVP of the 2021 Outback Bowl. He helped the team win the Conerly Trophy in 2021.

Matt Corral was born Matthew Anthony Corral on January 31, 1999, in Ventura, California. He is the son of Peter Corral and his wife, Elizabeth Corral. Matt graduated from Long Beach Polytechnic High School and enrolled at the University of Mississippi. Talking about his physical appearance, Corral stands six feet two inches tall and weighs 93 kg.

Journey to the NFL Draft

Matt played numerous sports in his early days. He had to switch numerous schools, which would help him pursue his football career. In his High School career, Corral totaled over 11,000 yards and 123 touchdowns. The player got invited to the U.S. Army All-American Bowl and played. After graduation, Matt received numerous offers from universities and initially committed to playing at the University of Southern California but later moved to Mississippi. 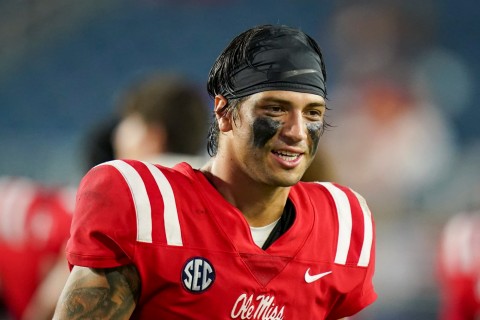 Matt plays in the SEC for the Ole Miss SOURCE: First Pick

Matt appeared in just four games in his freshman year and completed 16 of 22 passes for 239 yards with two touchdowns and one interception. In the 2019 season, The player appeared in ten games and started in four games as their quarterback. He led the team with 1,362 passing yards and six passing TDS. Corral was listed for Freshman All-America Team and the Shaun Alexander Freshman of the Year Award at the end of the season.

In his sophomore year of 2020 season, Matt started in all ten games for the Rebels as a quarterback. He completed over 70 percent of his passes for 3,337 yards and 29 TDs, becoming the fourth SEC player to finish as NCAA leader in total offense per game. At the end of the season, The player received numerous awards and set an Ole Miss bowl record, accounting for 379 yards of total offense.

Matt completed 68 percent of his passes for 3,339 yards and 20 touchdowns in his junior year, with just four interceptions. He appeared in the Sugar Bowl and was named the MVP in the Outback Bowl. Corral had decided to list his name for the 2022 NFL draft but had to withdraw after suffering a leg injury.

Who is Matt Corral's Girlfriend? Know About His Girlfriend and Relationship status

Matt is very much private about his love life. He has successfully kept his personal life away from the media. The American football player is very early in his career and must focus on the upcoming NFL draft. Corral is an active social media user, but his timeline is filled with photos of his friends, family and games. Matt could be single or dating someone.

Matt is living a lavish lifestyle through his parent's successful career. He is yet to start his professional career and will be making millions in the coming days. Corral is ranked as one of the best-prospectus for the upcoming NFL draft, and the salary of a first-round pick could be more than $8 Million.