Joel Ayayi is a French Basketball Player who currently on the rooster of the Gonzaga Bulldogs, alongside Killian Tillie and Corey Kispert, of the West Coast Conference. Coming out of high school, he was a four-star recruit ranked by recruiting websites such as Rivals and 247 Sports who committed to play for Gonzaga River offers from Baylor and Georgia Tech.

Ayayi was born on 5th March 2000 under the star sign Pisces. He was born in Bordeaux, France, and enrolled at INCEP, a sports institution in Paris, France. He holds dual nationality since his parents are from Benin who moved to France.

No.11 - Gonzaga Bulldogs is one of the best international prospects to enter the 2020 NBA draft. The French native is ranked at #63 by the CBS Sports and will possibly be in mid to last pick of the second round.

If Joel goes on to be picked in the second round of the draft, his projected salary will certainly be in millions as assumed from previous years where prospects such as Vanja Marinkovic, Dewan Hernandez, and Miye Oni all have signed a three-year contract worth $4,198,912 with a guaranteed amount of $898,310 and an average salary of $1,399,637 annually. 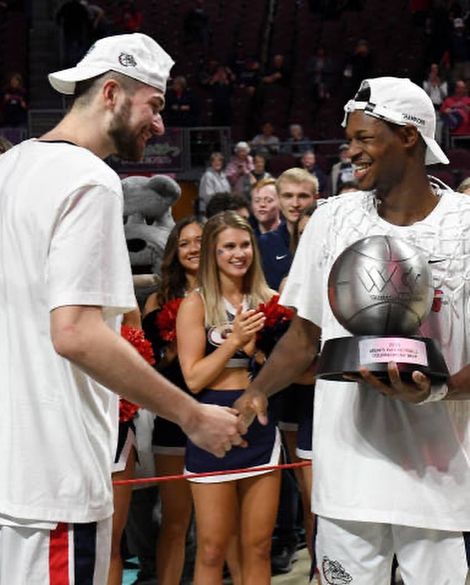 The Sophomore for Gonzaga will soon become a worldwide phenomenon but as for the time being, he is still a college student who has not earned any substantial cash from his basketball profession. Regardless, the sports athletes do tent to receive incentives and grants for their wonderful abilities which they showcase on the court.

As a student in the Gonzaga facility, he would have received $45,140 dollars in scholarship alone. In addition to the scholarship, they tent to get medical insurance and other facilities that the college offers for their athletic students.

To conclude, the net worth of Joel Ayayi is yet to be concluded and will be updated shortly.

The Point guard for Gonzaga is going through the 2020 NBA draft to evaluate himself as the possible future candidate in the NBA. As he mentioned via Instagram and Twitter on 25 April 2020, that he will not be hiring an agent and will only be testing the draft waters while maintaining his college eligibility like many other prospects such as Xavier Tillman, Corey Kispert, and Isaac Okoro. 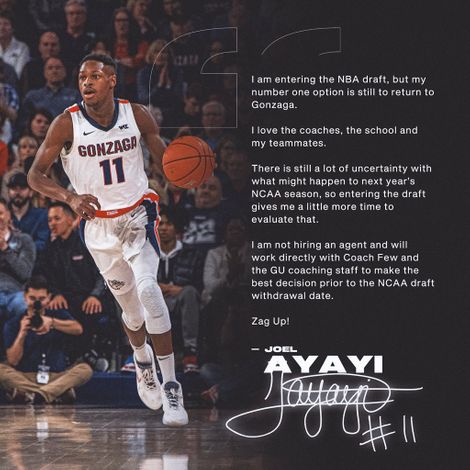 Since he will be testing the draft waters, players will have until June 3 to withdraw from early entry. However, due to the recent pandemic of the coronavirus (COVID-19), the possible dates for the withdrawal may be changed accordingly. If Joey wishes to return, he will be continuing his junior year with the Zags.

The 6 ' 5'' tall Ayayi is pretty secretive about his personal affairs and has not revealed any information regarding his private matters such as his dating life. From Speculation, Joel seems to be single at the moment since he is focused on his career.

Moreover, the 6 ft 5 in hunk has not even posted any pictures of him with any potential girlfriends besides his friends and teammates. Judging from the pictures, Joel might be trying to hide his personal matter from the media as to neglect controversies.

The 20-years-old comes from a athletic background as well. His father played professional basketball in France and the Beninese National Team. However, holding dual nationality, Joel decided to play for the Frech National Team representing France at the FIBA World Cup and FIBA European Championship.

His sister, Valeriane Ayayi played for the French Women's National Team, her most notable highlights were the 2016 Summer Olympics and the Women's National Basketball Association (WNBA). His brother, Gerald Ayayi, plays professional basketball in France.

With some fine play at the basket over the rim and impressive steals, he was awarded the Most Outstanding Player of the Tournament after winning against Saint Mary scoring 17 points in the final.