Jeison Rosario is a rising Dominiciaan professonal boxer. He started his professional boxing career in May 2013 and has fought in almost two dozens od professional events. Jeison currently competes in the light-middleweight division. Rosario held the unified WBA (Super) and IBF light middleweight titles from January to September 2020.

Jeison Rosario was born Jeison Manuel Rosario Bastardo on April 7, 1995, in Santa Domingo, Dominican Republic. He is among the three children born to Isabell Bastardo and her former husband. His biological father left him stranded, and a single mother raised him. Jeison did not have a formal education. Talking about his physical appearance, Rosario stands five feet and eleven inches tall and weighs 70 kg.

Jeison started training in boxing from a very early age. He had to fight for him to get a stomach full of food. For him, fighting was to keep his existence alive rather than starting a boxing career. There is not much information about his amateur career with the media personals. Rosario made his professional debut in May 2013 against Confesor Guzman at Club Mauricio Baez and won the match in the first round via a TKO. Until the end of 2013, He was a well-known professional boxer in his hometown after winning all four professional games in his first year. 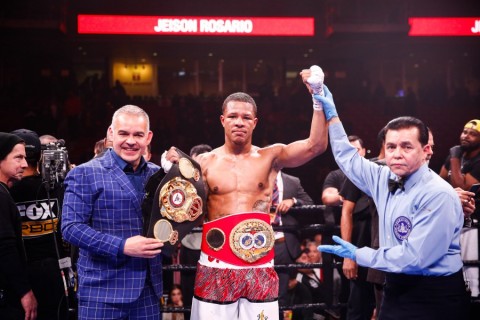 Jeison Rosario, along with his Boxing titles SOURCE: Sport EKZ

In November 2014, Jeison got his first chance for a vacant Dominican Republic welterweight title against Jose Vidal Soto. He eventually won the match in the second round via TKO. After a year, Rosario fought with Euri Gonzalez for the vacant WBA Fedecaribe light middleweight title and won in the third round via TKO. He defended his titles in the next two matches.

In April 2017, Rosario fought against Nathaniel Gallimore at lost the match in the sixth round via TKO, and it was his first loss in his professional game. In February 2018, He was up against Mark Anthony Hernandez, and the match ended with a draw via split decision. In January 2020, Jeison fought against Julian Williams for the WBA (Su[er), IBF, and IBO light middleweight title and won the match.

In September 2020, Rosario faced Jermell Charlo in a title merger match and eventually lost the match in the eight-round via KO. After remaining out of the ring for almost a year, he faces Erickson Lubin for the WBC Silver light middle title.

Yes. You read that right. Jeison is the proud father of three children. The American professional boxer has not shared a word about his wife and his children in public. His Instagram timeline is filled with photos of his training and matches. He has successfully kept his personal life away from the media. In an interview, Jeison's mother, Isabell, shared about his wife and children.

Jeison Rosario has an estimated net worth of more than $500,000. He is very much early in his career and shall be adding much more in the future. Jeison took home $250,000 from a single match-up against Julian Williams, whereas his opponent made $750,000 for the match. In 2020, Jeison earned $400,000 from his match against Charlo.