Jermell De'Avante Charlo better known as Jermell Charlo who is a two-time light middleweight world champion. He held the WBC title 2019 and earlier from 2016-2018, as well as the unified WBA (Super), IBF, and The Ring titles since September 2020. Currently, he is ranked #1st in the world's best active light middleweight by both BoxRec and The Ring magazine and ranked #4th in the world by the TBRB. To date, he has a pro record of 34-1-0 (win-loss-draw).

Lafayette, Louisiana native, Jermell Charlo was born on 19th May 1990, Taurus. The thirty years old is an American by nationality who belongs to the Afro-American ethnic background. Further, he stands 5 ft 11 in (180 cm) tall and weighs 154.75 pounds.

How Much Is Jermell Charlo's Net Worth In 2020?

A professional since 2007, Jermell Carlo has summoned a tremendous sum of money through his boxing career. His career earning is disclosed below the table.

As of 2020, his net worth is estimated at $2.5 million. Scrolling through his Instagram, the boxer has a lavish lifestyle. He has shared pictures of his expensive cars.

On 18th May 2020, Charlo was arrested for domestic assault for, respectively, allegedly choking and striking his former girlfriend, identified as Jazmyne Olison. Olison told police the incident took place “on or about” May 17. Charlo posted a $20,000 bond and was released that day. On 20th March it was reported a jury found Jermell Charlo not guilty of two counts of domestic violence against an ex-girlfriend in a courtroom in Dallas, Texas.

Charlo will now focus on a return to the ring and attempt to regain boxing gold, as he will have a contractually-obligated rematch with Harrison sometime this year, possibly in June.

Jermell is younger than his identical twin Jermall by one minute born to parents: Kevin Charlo and Terrie Charlo. Charlo’s father was a boxer, his uncle as well, and when Jermell and his twin brother Jermall would join father at the gym in their native Houston, they’d encounter such legends as Mike Tyson, Evander Holyfield, and Jesse James Leija, all of whom worked with Hall of Fame trainer Ronnie Shields, who has long shepherded Jermall Charlo’s career as well. 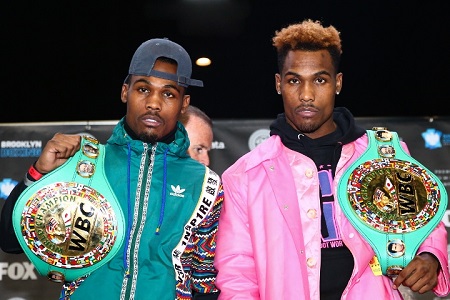 Both brothers attended Alief Hastings High School in Houston, Texas. Further, Jermell graduated to the elite level on the amateur boxing scene after two years, winning a bronze medal at the 2005 Junior Olympics at age fifteen.