Hyun Mi Choi is a well-known South Korean female professional boxer. She has been fighting in the professional ring since 2008 and is among the longest-fighting female boxers. Hyun holds WBA female super-featherweight title since 2014 and previously the WBA female featherweight title from 2008 to 2013. Choi is ranked third as the best active female boxer behind Terri Harper.

Hyun Mi Choi was born on November 7, 1990, in Pyongyang, North Korea. She is among the two children born to Choi Young-Choon and his wife, Hyun-mi. In 2004 her father, a successful businessman in North Korea, fled the country, followed by his family to South Korea. Since 2004, She holds South Korean nationality. Hyun stands five feet and seven inches tall and weighs 59 kgs.

Hyun started training as soon as she fled to South Korea. She entered the amateur ranks in South Korea in 2006, winning 5 domestic titles before turning professional in 2007. Choi made her professional debut and won her first title, vacant WBA female featherweight, in the debut match against Xu Chun Yan. She won the match via Unamious decision. Hyun retained her title in the next six matches until 2013. 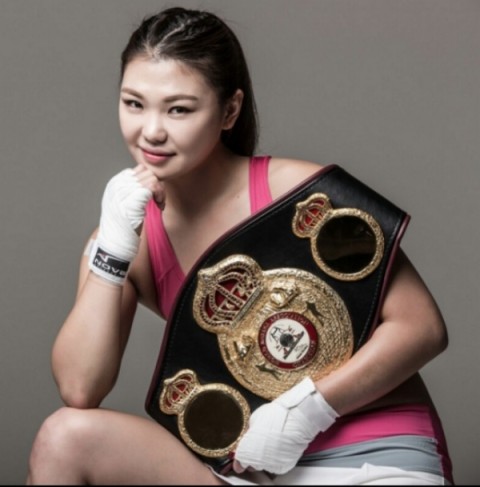 Choi shares a photo with her title SOURCE: [email protected]

In 2018, Choi fought in just a single match in which she defended her title against Mayra Alejandra Gomez. Since 2018, Hyun has just fought in two matches and has won both of them. She has won fourteen matches via decision in her professional career. In May 2021, Choi was scheduled to face Terri Harper, but Terri had to move out after suffering an injury. Hyun is still undefeated in her professional boxing career.

Choi could be secretly dating someone and waiting for the right time to open about her relationships.

Know About Her Net Worth, Earnings, and Contract

Hyun has an estimated net worth of more than $500,000. The average salary of a professional boxer is more than $60,000. Choi has been fighting in the professional ring for more than a decade. She must have been making a huge sum from her endorsement, advertising, and contracts. In 2020, Matchroom Boxing signed a deal with Katie Taylor, Terri Harper, Rachel Ball, and Hyun Mi Choi.