Terri Harper was born on November 2, 1996, in Denaby Main, Yorkshire. She is among the two children born to her biological parents. Harper has two half-siblings and a sister. Her parents separated soon after her birth, and her mother remarried. Terri started training for boxing from a very early age of twelve. Talking about her physical appearance, Harper stands five feet and five inches tall and weighs over 58 kgs.

Yes, You read that right. Terri is still undefeated in her professional boxing career. The English boxer won a silver medal as an amateur at the 2012 European Junior Championships. However, She quit boxing to concentrate on her education. Harper continued her boxing career after completing High School. Terri had a difficult return to her boxing career, having lost two back-to-back matches.

Harper received a call from a boxing promoter with an offer to turn over to the professional side of the sport. She subsequently accepted the offer and has "never looked back since". She competed in seventeen amateur matches which saw her win three national titles and a silver medal at the European Junior Championships in Poland.

Terri made her professional debut in November 2017 against Monika Antonik. She won the match in the fourth round via Points. The following year, Harper fought in four games, winning all of them. In March 2019, Terri fought for her first title match of vacant WBC International female lightweight against Nina Bradley. She won the game in the tenth round via TKO. Shortly after the title match, The British Fighter won retained her titles and won WBC female super-featherweight title against Eva Wahlstrom.

In August 2020, Terri retained her WBC and IBO female super-featherweight titles against Natasha Jonas and Katharine Thanderz. In April 2021, Harper was set to face Hyun Mi Choi but was forced to withdraw from the bout after suffering a hand injury during sparring.

Terri belongs to the LGBTQ community. She came out as gay to her father and stepmother at the age of 14. Harper is engaged to her fiance, Jenna Hayden. The love birds have been seeing each other for more than five years. 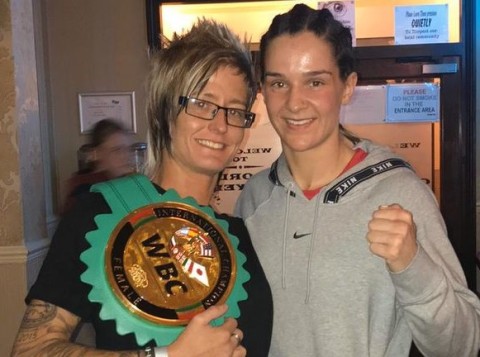 Terri and Jenna are very much open about their relationship and keep sharing each other's photos regularly.

How Rich is Terri Harper? Know About Her Earnings, Salary. and Net Worth

Terri Harper has an estimated net worth of more than $200,000. She has accumulated most of her net worth through her successful career as a boxer. In August 2020, Harper made $180,000 from her match against Natasha Jonas. She is very much early in her career and shall be making millions from her games.