Hector Herrera is a Mexican footballer who plays for the Major League Soccer club Houston Dynamo and the Mexico national team. Herrera plays as a midfielder and wears jersey number 16 in his current squad. Also, he can play the role of Defensive Midfield.

Besides, Herrera is one of the most experienced footballers on his team who has already played for multiple clubs. Since March 2022, Herrera has been playing for his current club. And Herrera has been a part of the senior squad of Mexico since 2012 and has earned over 100 caps.

How Much Is Hector's Net Worth? Career Earnings and Salary

Hector has amassed a massive amount of money from being a professional footballer. Being a part of multiple teams, Herrera has received huge deals. So, his current net worth is over $5 million. He currently plays for Houston Dynamo and earns £89,000 a week, becoming the highest-paid athlete in his club. Likewise, Herrera played for FC Porto, and when he signed a deal with them, Herrera received a whopping €11 million. And his current market value is €2.80 million, while his highest value was €22 million, recorded on January 11, 2019.

Herrera is a married man and is married to his longtime partner Shantal Mayo. Before tying the knot, they knew each other for a long time and also shared the relationship of a girlfriend and a boyfriend. Mayo and Herrera married in 2015. 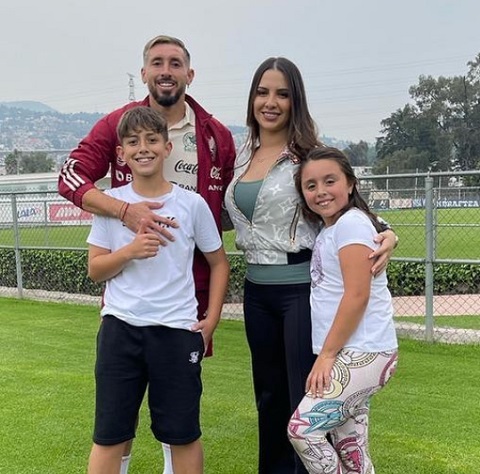 Apart from being recognized as the wife of Herrera, she is also an entrepreneur with a strong presence on Instagram. Being married for over six years, they have started a family. The married couple is blessed with two children, Mia Valentina, and Hector David Herrera.

Herrera posts his moments with his family on social media. Hector Herrera with his mates after scoring a goal  SOURCE: Instagram @h.herrera16

An announcement was made on June 28, 2013, stating Herrera's transfer to Portuguese club Porto for €8 million. Hector and his fellow Mexican teammate Diego Reyes would debut with Porto on July 13, 2013, during the finals of the Valais Cup against the French team Marseille.

Herrera's official league debut with the team would come later on August 18, 2013. In his first season with Porto, he played 17 league matches and 33 matches across all competitions. His score in the first season was three goals made during the league game. Porto performed average in all of the seasons to follow.

Hector proved his talent and capability to lead the team and was chosen as the team captain of Porto as well. The 2017-2018 season was the glory season for Porto as they won the league title. He captained the Porto team, which included top players like Iker Casillas, Yacine Brahimi, Maxi Pereira, Danilo Pereira, and others that got to the finals of Supertaca Candido de Oliveira in 2018.

On July 3, 2019, Herrera signed a deal with Atletico Madrid. He represented the team in many games. After making 58 game appearances, he received a chance to play for another team.

For the 2012 CONCACAF Olympic Qualifying Tournament held in the United States, Herrera was chosen as one of the participants from the Mexican team. Defeating Honduras in the finals, Mexico won the tournament and qualified for the 2012 Olympics Games held in London. Mexico won the Gold Medal in the 2012 Olympics, defeating Brazil 2-1 in the final. Herera was chosen to participate in the Olympics game as well. In 2012, Herera was also part of the Mexico team to start in Toulon Tournament. Herrera would prove to be a vital asset to the team, and Mexico won the Tournament with a 3-0 victory against Turkey. Herrera was awarded the Meilleur Joueur as the most outstanding player in the tournament. For the upcoming FIFA World Cup, Herrera is included in the 23-man squad, which was made official on June 4, 2018. The national team of Mexico has high hopes for Herrera to lead the team to success in the 2018 World Cup. The Mexican team will consist of high-profile players like Carlos Vela, Javier Hernandez, and Giovani dos Santos.

Herrera was born Hector Miguel Herrera Lopez on April 19, 1990, in Rosarito Beach, Mexico, to parents Miguel Herrera and Maria Lopez. He received an EU passport after residing in Portugal for six years in June 2019. Herera's soccer career started in 2007 while playing for the Second Division Arroceros de Cuautla, a team based in the central state of Morelos. It was there that C.F. Pachuca noticed him.