Gennady Golovkin is a professional boxer from Kazakhstan who has the nickname GGG or Triple G which comes from his full name being Gennady Gennadyevich Golovkin. He is the current unified WBA, WBC and IBO middleweight champion. He is also the one who currently holds the longest active unified championship reign with him defending the title for five consecutive challenges.

He has become one of the top boxers in the world and no doubt, people are more than happy to buy the pay per view tickets to watch him fight. With him rising to the top of his field, he has also risen financially as well. Find out all about his net worth and the way he is living from his success.

GGG's Net Worth and Earnings

Golovkin's career has not only risen his status as one of the top boxers but has also helped to increase his financial status as well. He currently has an estimated net worth of$20 million.

Thank you @lafc for the honorary jersey, it was nice to be @bancofcaliforniastadium . Let me know if you ever need a defender!

He can literally make millions from his hands and fist. His fight against Canelo Alvarez had a 1.3 million pay-per-view audience which has earned him the reported $20 million from the fight. It was his career's highest-earning and has helped to make him financially strong.

Aside from earning from his fight, he has also been endorsed by various big-name companies. Some of the companies that have signed him include Nike's Jordan Brand, Hublot, Tecate, and Chivas Regal. All the endorsement deals that he has also helped to increase the net worth of this 36 years old boxer to what it is today.

Growing up, Golovkin was one of the four sons of a Rusin coal miner as such he did not have a luxurious lifestyle growing up. He comes from a struggling background and he went through various struggles to reach the point where he is at. Looking back at his life, his life today has come a long way from Kazakhstan's 'Black City' of Karaganda. 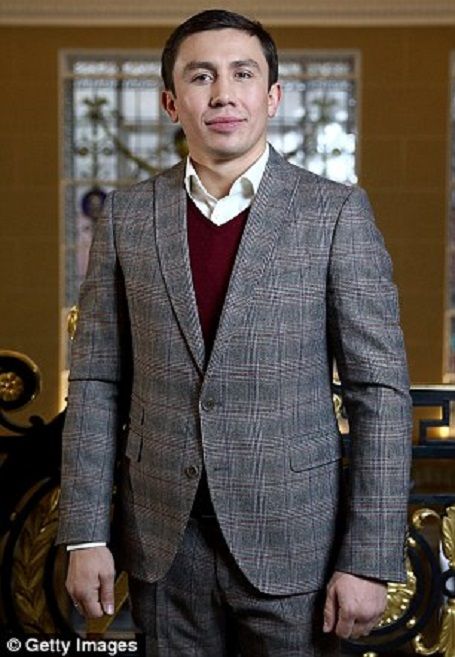 Out of His Boxing Attire SOURCE: dailymail

Today, he flies around the world and stays in a luxurious hotel which has all been made successful due to his success as a boxer. He spends most of his time preparing for fights and in search of opponents.

He moved to California in the United States in 2014. He is married to Alina Golovkin and has a son who he named Vadim after his elder brother who had lost his life in 1994 while undergoing the Russian government's service in Siberia. He moved to Santa Monica as it is closer to his training camp and it would make it easier for him to spend more time close with his family.

His earlier background has helped him to stay grounded which is why he is more careful while spending money and continues to lead a humble lifestyle.