Filip Petrusev is a Serbian College Basketball Player who currently plays for the Gonzaga Bulldogs alongside Joel Ayayi and Killian Tillie of the West Coast Conference. He was a four-star recruit coming out of Montverde Acadamy by recruiting websites such as 247 Sports, Rivals, and ESPN.

Petrusev was born on 15 April 2000 under the star sign Aries. He was born and raised in Belgrade, Serbia, FR Yugoslavia alongside brother David Petrusev.

No-3 for the Gonzaga Bulldogs, Petrusev has recently declared for the 2020 NBA draft and is one of the few international prospects in the draft who hails from Serbia. He started his basketball profession playing for the youth teams of Serbian powerhouses Crvena Zvezda and Partizan.

Entering the draft, Filip was ranked #61 in between Abdoulaye N'doye and Markus Howard by the CBS Sports. However, there is no denying that if he goes to be selected in the second round of the draft, the 20-years-old will be looking at a projected salary in millions.

In addition, To give a gest of his projected salary, we can compare him with some of the prospects from last year such as Dewan Hernandez who was picked at No. 59 by the Toronto Raptors and has signed a three-year contract worth $4,198,912 which includes $898,310 guaranteed and an annual average salary of $1,399,637. 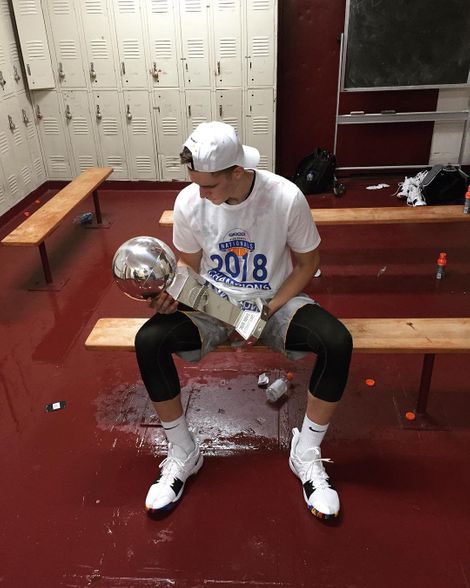 As mentioned above, Petrusev is still a college basketball player who has yet to turn professional. As per his net worth, he still has not earned any potential amount from his career. His net worth is still under review and will be updated soon. Although college players do tend to receive a scholarship and medical insurance from their college as an exchange for their skills and abilities. Filip would have received $50,000-60,000 in benefits and grants from Gonzaga University.

The Sophomore will enter his name onto the draft but has chosen not to hire an agent and just test the draft waters while maintaining his college eligibility. 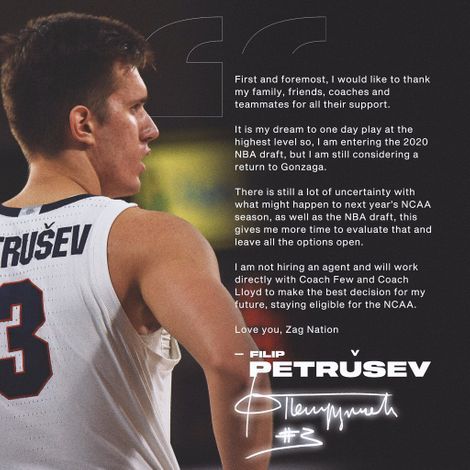 The Belgrade native announced on 26 April 2020 on his Instagram and Twitter that he will only be testing the draft waters.

Filip Petrusev Girlfriend: Who is the Gonzaga player dating?

The WCC player of the year is quite secretive about his personal matters and has not revealed by information about his relationship. His professional life might be as clear as water but his private life is buried deep within himself.

Scrolling through his Instagram, the talented Filip seems to be single as he only posts pictures with his teammates and friends. There does not seem to be anyone special in his life for the time being. However, since the NBA draft is approaching, he might be trying to stay focused in order to improve skills and ability to the fullest.

The 6' 11'' tall has represented Serbia in many tournaments as a national player and has won two Golds for his country at the 2017 Championship and the 2018 FIBA Europe Under-18 Championship.

As a power forward, he has some amazing attributes as a center and shows good promise while dunking at the basket. using his height, he is certainly one of the good rebounders in the game and also excels at scoring off-ball motion plays with a good motor.

However, lasks on the defensives as he struggles while blocking and also lacks the long-range shots. Although having flaws, he might be considered a good pick overall in the NBA draft.