Abdoulaye N'Doye is a French basketball player currently playing side Cholet of the LNB Pro A. Previously, he made the decision to withdraw his name from the 2019 NBA Draft but returned to France to continue his development. Seems like the hunk did the right one as N’Doye showed marked improvement and is now one of the most international draft prospects available for the 2020 NBA Draft.

Dunkirk, France native, Abdoulaye N'Doye was born on 9th March 1998, under the star sign Pisces. The twenty-two years old holds a French nationality who came from the African background.

A professional since 2016, Abdoulaye N'Doye has summoned considerable sum from his basketball career playing in the LNB Pro A for Cholet. As reported, his annual salary from the club is $100,000. 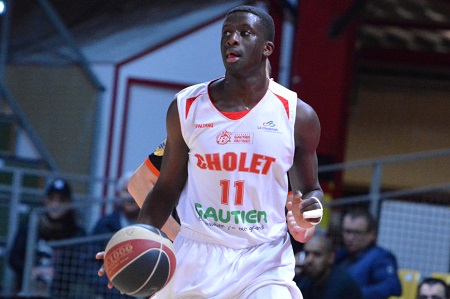 Moreover, N'Doye is 2020 NBA Top 100 Prospect Ranked #44, a second-round pick behind Killian Hayes, R.J. Hampton, and Aleksej Pokusevski. The French play more like a big point guard, showing great vision and passing (4.0 assists per game) along with the ability to attack the basket and finish at the rim. He has also greatly improved as a shooter this season, raising his percentages from the field (45.7 to 52.3 percent), three-point line (37.8 to 44.1 percent), and the free-throw line (52.8 to 75.3 percent).

No. 11 – Cholet point guard, Abdoulaye N'Doye is currently single and doesn't have a girlfriend right now since it is confirmed by some of the trusted website's sources. It can also be confirmed by exploring his official social sites since he hasn't shared anything about his love affair.

N'Doye is a career-focused and spends most of his time on basketball in is practicing hard for his upcoming NBA draft.

N'Doye's father, Oumar, is a former basketball player who played professionally in France. On the other hand, his mother is a doctor. He is the youngest of three siblings: he has a brother, Mansour, and a sister, Amina.

In addition to basketball, he grew up playing tennis and handball. At age five, he started playing basketball for his local club, Dunkerque Malo, under his father's coaching.

At 18, N'Doye had his first experience with the Cholet senior team in the 2016–17 season. Further, he inked his first professional contract with Cholet on 14th August 2017 and started receiving regular playing time in the Pro A.

On 28 December, he was picked to play in the LNB All-Star Game.