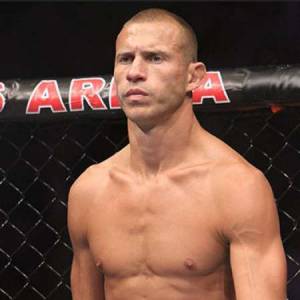 Besides UFC, he previously fought several matches at World Extreme Cagefighting. He is known as the "busiest" fighter in the UFC has the record of the most wins in the promotion with 20 wins with the UFC.

Net Worth and Endorsements of Donald Cerrone

Donald Cerrone has an estimated net worth of $7 million in 2019, including all of his properties and incomes. Donald's net worth has increased in 2018, as he had a net worth of $5 million in 2016. Being an MMA fighter, he doesn't receive a fixed salary, instead gets paid for each match.

Wanted to welcome @sheathunderwear to the Cowboy and @bmfranch Team. Very comfortable and never Ride up underwear. Perfect training or any wild shit we do! Great @rodrigosnaps

Related Article: Conor McGregor vs Donald Cerrone In Jeopardy, After UFC Tries To Make it A Co-Main Event

Currently, he is in an affair with a lovely girlfriend, Lindsay Sheffield. The couple is often caught in public and private place together. However, in the future, Lindsay can be his spouse, but at present, there is no confirm news regarding it. He is cheerful, joyful and decent and enjoying his game and love his girlfriend.

In 2014, the duo got engaged. In April 2018, he revealed that his girlfriend is pregnant with their first child and are expecting a baby soon.

Took mom and dad to Mexico!

On June 29, 2018, Cerrone and his fiancée welcomed their first child, have a son, Dacson Danger Cerrone.

Talking more about his height and body weight, he is 6 ft. tall and his body weight is 157 lbs.

Donald Cerrone was born as Donald Anthony Cerrone on 29 March 1983 in Colorado, Springs, the United States. He is an American by his nationality and his ethnicity is white (Mexican heritage). Further, his birth sign is Aries and Cowboy is currently 34 years of age.

Cerrone grew up in Denver, Colorado and attended Air Academy High School for his early education. He had to live with his grandparents after his parents got separated when he was a child. He was diagnosed with Attention Deficit Disorder as a child.

Moving to his professional career in mixed martial arts. He started his career in Commerce City, Colorado at a gymnasium called Freedom Fighters and began training with Jon Jones and Rashad Evans.

He signed a contract to fight in the World Extreme Cagefighting (WEC). Later in 2010, WEC merged with the UFC, and then all fighters of WEC were shifted to UFC.

He faced Nate Diaz at UFC 141 on 30 December 2011 and lost the back-and-forth fight via unanimous decision. Currently, he is one of the paramount players of UFC and there is info that on February 21, 2016, he is going to face Tim Means in a welterweight. He is often termed as the best fighter in welterweight by Dana White.

He recently defeated Yancy Medeiros on Sunday night’s UFC Austin show in February. He then faced Leon Edwards but went on to lose the match.

On November 10, 2018, he faced Mike Perry at UFC Fight Night: Korean Zombie vs. Rodríguez. He won the fight via Submission (armbar) in round one.