Laila Ali is a well-recognized American television personality and former professional boxer. She is best known as the daughter of an American professional boxer, activist, entertainer, and philanthropist Muhammad Ali. Laila started her professional career in 1999 before retiring with WBC, WIBA, IWBF, and IBA female super middleweight titles.

Laila Ali was born Laila Amaria Ali on December 30, 1977, in Miami Beach, Florida. She was born to Muhammad Ali and his third wife, Veronica Porche Ali. Her father was a legendary boxer, and her mother was a psychologist. Her parents separated in 1986. Her mother married Carl Anderson in 1992. Laila graduated from California Santa Monica College with a business degree. Laila stands five feet and ten inches tall and weighs over 72 kgs.

Laila Ali has an estimated net worth of more than $10 Million. Ali has accumulated most of her hefty net worth through her successful career and inheritance from her parents. Also, She must have made millions from her endorsement deals with Subway, Kohls, and T.J. Maxx. Laila owned her own nail salon before she started her boxing career.

In 2001, Ali fought Jacqui Fraizer-Lydein a PPV event which was the first time in women's boxing history of the First Pay Per View boxing card. Also, She must have earned a reasonable sum from her television shows. Laila was s psrt of the American reality show, Dancing with the stars. Ali hosted the revival of American Gladiators alongside Hulk Hogan.

The American boxer is living a happy married life with her husband and her children. Laila tied her wedding knot with Curtis Conway on July 23, 2007, in Los Angeles. The love birds had been dating for sometime before tying their wedding knot. Soon after the wedding, The pair was blessed with two children, a son born in August 2008 and a daughter born in April 2011. 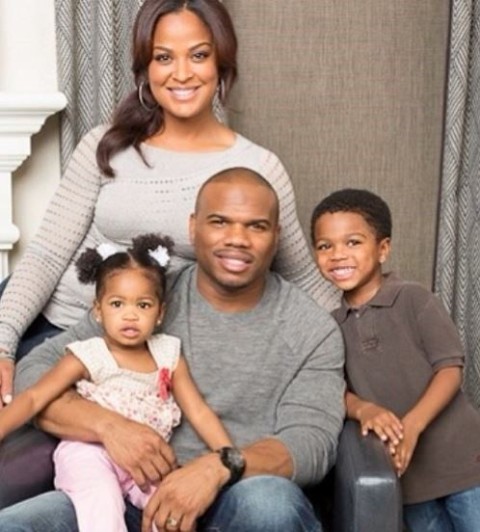 Laila Ali with his wife and children SOURCE: Pinterest

Laila had another failed marriage before her marriage with Curtis. She was married to Johnny "Yahya" McClain for more than five years. The duo walked down their wedding aisle on August 27, 2000. They met each other through her sister Hana at her father's 57th birthday party. Her husband started working as her manager. This happy-looking relationship ended in 2005. The reason for their separation is not shared with the public.

Laila made her professional debut in 1999 against April Fowler. She won the match via KO in the 1st round. In 2001 Ali fought against George Foreman's daughter, Jacqui Frazier-Lyde. Ali won by a majority judges' decision in eight rounds. This match by Ali and Frazier was the first main-event pay-per-view match between two women. In 2002 The boxer won her first title of IBA Super Middleweight title against Suzette Taylor.