Stephen Fulton is a rising American professional boxer. Fulton has been fighting in the ring for almost seven years. Fulton is currently raked among the top 10 junior featherweight fighters. Stephen was also a former IBO Super bantamweight titleholder back in 2019.

Stephen Fulton was born Stephen Fulton Jr. on July 17, 1994, in the United States. He is among the four children born to his parents. His mother raised them being a single mother. He has an older sister named Iyana Moore. There is nothing much about his father with the public. Stephen did not have a good childhood. He is yet to share information about his education qualification with the media.

Stephen Fulton has an estimated net worth of more than $2 Million. He credits most of his net worth to his successful career in boxing. Fulton has been involved in professional fighting since late 2014 and has been winning every single match ever since. Being a professional boxer, they earn a good amount through brand endorsements and contract. 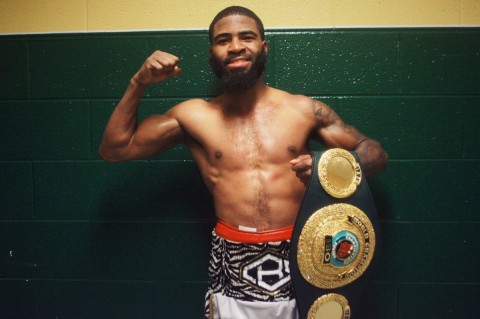 Fulton shares a photo along with his former title SOURCE: Essential Sports

The average salary of a professional boxer currently working in the United States is more than $50,000. Fulton is a top-class player so, he earns much more than the average earnings. In early 2020, Stephen earned $100,000 from his fight against Arnold Khegai. His opponent earned $60,000. As per sources, the duo earned much more than adding the sale of pay-per-view and match-winning bonus, which is not disclosed to the public.

Unlike other famous boxer's Fulton is not active on any social media platform. This has added a huge gap between Stephen and his fans. Following the information available, we can be sure that Stephen is living a happy single life.

Stephen keeps himself busy spending time between his training and his family. Stephen is active on Twitter, where he shares posts about his matches and his games. However, He could secretly be dating some and waiting for the right time to open about his relationship.

In 2019, Fulton got his first major title fight for the International Boxing Organization World Super Bantam Title up against Paulus Ambunda. He won the match via unanimous decision. After this title, he defended the title in his next two matches.

On January 23, 2021, The American boxer is set to face Angelo Leo for WBO World Super Bantam Title. The match was scheduled in early 2010 but was canceled because He tested positive for COVID. The player will be earning in six-figure digits. This is one of the most anticipated games in recent times.