Ilford, East London, England native, Nigel Benn was born on 22nd January 1964, under the star sign Aquarius. He holds a British nationality and is of African ethnic background. He stands 5 ft 9 in (175 cm) tall.

Nicknamed "The Dark Destroyer" for his formidable punching power and aggressive fighting style, Nigel Benn's net worth as of 2021 is $20 million. His incredible career record of 42 wins in 48 bouts brought in a sizable amount of cash. In his grudge match with Chris Eubank in 1990, he received a paycheck of 400,000 despite losing.

Nigel Benn currently lives in Sydney, Australia, where he owns a 10-bedroom house. Before moving into the multi-million mansion, Benn and his family have lived in numerous exotic locations. Los Angeles, Majorca, Miami, Barbados, Hawaii, Jamaica-Benn has lived in all these places over the past two decades.

Aside from boxing, Nigel Benn is also known for his charity work. Namely, he is the patron of a children's charity that helps children with life treating conditions, as well as their families.

Nigel Benn has married twice. He first tied the knot with Sharon Crowley in 1991. The couple shared three children: Dominic, Sade, and Rene. However, Nigel and Crowley divorced.

Then, he remarried Caroline Jackson in 1996. The couple shares twins Connor and India. Later, Nigel revealed he was desperately addicted to sex and drugs in the late 1990s. Further, he admitted cheating on his second wife Carolyne for 16 years. He blamed his addiction on 'very low self-esteem' after the failure of his first marriage, but said he hated the impact his behavior was having on his second family. 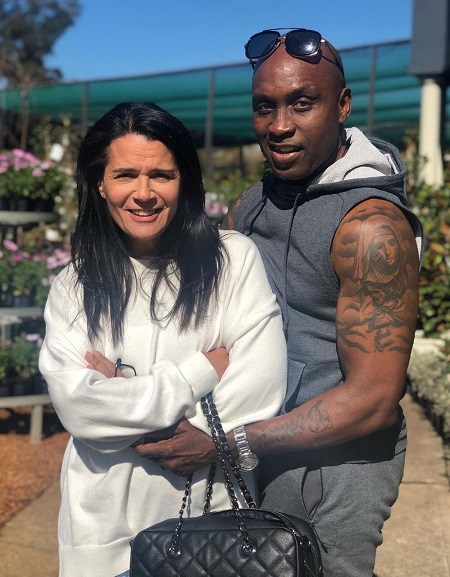 Nigel Benn and his second wife SOURCE: The Sun

In 2004, when the family moved to Majorca, he said: “Carolyne threw me out of the house. “I lived with my pastor for a year, studying the word of God, trying to repair the damage I’d done.” The couple was eventually reconciled and migrated to Australia. Since the early 21st century, Benn has developed a strong Christian faith, becoming a born-again Christian.

On 28th January 1987, Nigel made his professional boxing debut at Fairfield Halls, London, England against Graeme Ahmed. He won the fight via TKO. On 20th April 1988, he had won his career's first title, the Commonwealth middleweight title against Abdul Umaru Sanda. Further, he retained the title thrice and eventually lost on 21st May 1989 against Michael Watson.

On 29th April 1990, he won the WBO middleweight title against Doug DeWill. He retained the title in the following match but lost against Chris Eubank on 18th November 1990.

On 3rd October 1992, Nigel won the WBC super-middleweight title against Mauro Galvano, retaining it following 10 bouts. On 2nd March 1996, he was defeated by Thulani Malinga and took the title from him.