Mixed Martial Arts is one of the popular games of the world. The game has millions of fans from all around the world and Charles Oliveira is one of the professional mixed martial artists from Brazil. Currently, he competes in the lightweight division. Before landing his steps at UFC, he fought in small Brazilian promotions.

He was born on October 17, 1989. His place of birth is Guaruja, Sao Paulo, Brazil. He is Brazilian by his nationality. His horoscope is Libra. There is no info about his parents. He has not mentioned his siblings. As of August 27, 2016, his ranking is #13 in official UFC lightweight.

Charles Oliveira was born and raised in his birthplace. At the age of 12, he began training in Brazilian-Jiu-Jitsu. He won his first major title as a white belt in 2003. He began his career in the home country of Brazil. In March 2008, he made his debut at the Predator FC-9-Welterweight Grand Prix event. In the first round, Jackson Pontes was defeated by him. He also managed to win the second fight against the Viscardi Andrade. Eventually, he won the championship by defeating Diego Braga. He won the match by TKO in the first round of the fight.

Oliveira faced Kevin Lee at UFC Fight Night 170: Brasilia most recently in March 2020. He defeated Lee via submission in the third round.

Charles Oliveira is married to his wife Talita Roberta Pereira. The couple is tied in a marital relationship since 15th March 2014. Charles revealed that he was getting married to his fiance Talita after his match against Andy Ogle.

I won my first fight and now I'm going to marry the woman who's been with me on this road for a long time. I've always done everything right. The wedding will only add and improve our lives even more. It will help me a lot in the wedding and on the honeymoon too (laughs). I just wanted to win the fight, regardless of the form. But God knows what he does.

He also has a daughter named Tayla Oliveira with his wife. 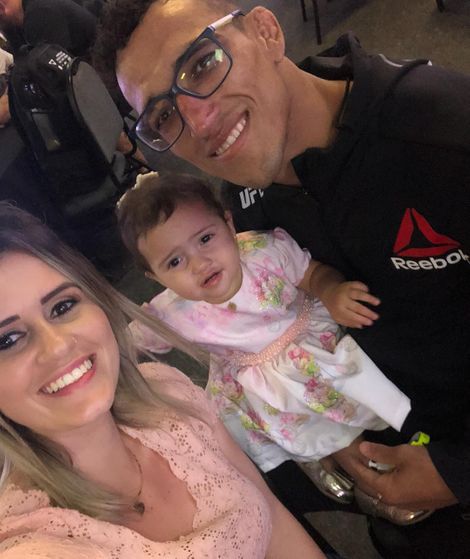 The immensely popular Charles Oliveira has a great physique. He has a standard height of 5 feet and 10 inches that is around 1.78m. His bodyweight is around 155.0lb. He has maintained a pretty amount of bank balance from his salary and net worth.