Regarding his love life, he is married and has four children with his wife. Further, he has a jaw-dropping net worth of $1.5 million.

How Much Is Jim Miller Net Worth In 2019? Career Earnings

As of 2019, Jim Miller has an estimated net worth over $1.5 million, mostly earned through his MMA career. Signed to UFC since 2008, Miller has earned huge sum through fighting at the events. His total UFC career earning is reported $2,115,000.

What a awesome night. Got to share a card with my brother @mickeygall, share the Octagon with the legend and HOFer @clayguida, and share the experience with my New Jersey fans. @ufc #legend #brothers #ufcnewark

Before UFC, he has competed at Ring of Combat, CFFC, Reality Fighting, and Combat in the Cage through which he might have summoned hefty sum.

Matter of fact, there is no fixed salary in MMA, the fighter earns the per fight.

Besides, he earns much from his endorsement deals.

Is Jim Miller Married? Know His Personal Life, Wife, Children, and Other Facts

Significance to his personal life and biography, Jim Miller is a married man. He married his girlfriend after having a long affair with her. Since getting married to till date, the lovely couple is living happily together. 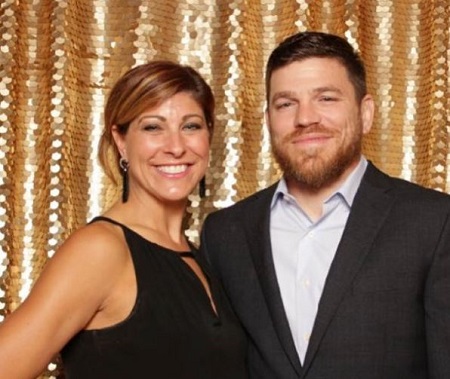 There is no rumor of separation between the blessed couple. With his wife, he has four children. His elder child was born in 2010.

Prior to being a professional MMA fighter, Jim along with his brother Dan worked in a Construction company. He is popular but controversy has not affected his career.

Jim Miller is one of the most recognizable names in the world of MMA. He has an awesome career and a successful future ahead. He has reached the age of 35 now. He has an average height of 5’8”, which is around 1.73m. His weight is 70 kg.

Jim Miller was born on August 30, 1983, in Sparta Township, New Jersey United States. Regarding his nationality, he is American. His ethnicity belongs to white. His zodiac sign is Virgo.

Jim Miller attended Sparta High School where he competed in the wrestling. He also spent one year of collegiate wrestling at Virginia Tech. Currently, he holds a black belt in Brazilian jiu-jitsu. He started training in mixed martial arts in 2005.

On August 27, 2016, he faced Joe Lauzon at UFC on Fox: Maia vs. Condit. He won the fight via decision (split) in the third round. On February 11, 2017, he faced a loss against the veteran fighter Dustin Poirier. He has extraordinary mixed martial arts records of 28 wins in 38 fights. His wins include four by knockouts, thirteen by submissions, and eleven were by decisions. He lose against Anthony Pettis on July 8, 2017, at UFC 213.

On 3rd August 2019, he defeated Clay Guida at UFC on ESPN: Covington vs. Lawler.