Caleb Plant was born Caleb Hunter Plant on July 8, 1992, in Ashland City, Tennessee. He is among the three children born to Richie Plant and his wife, Beth Plant. The boxer did not have a sound family environment while he grew up. He was raised along with his two sisters, Hannah and Madeline. In 2019, his mother passed away after being shot and killed by a deputy police officer.

Earnings and Net Worth of Caleb Plant

Caleb Plant has an estimated net worth of more than $3 Million. He has accumulated most of his net worth to his successful career in boxing. Plant is yet to lose a single match in his professional career. He has been earning millions for his matches. Caleb is ranked among the top earners in the professional boxing of the 2019 money list.

In 2019, Caleb earned the second-biggest payday of the card for his match against Mike Lee. He earned $750,000 for his match. His opponent, Lee, earned $250,000. Plant was confirmed $150,000 as his guaranteed money and the remaining he received from his pay-pay-view contract and winning bonus. Caleb is set to face Caleb Truax in late January 2021, in which he will be earning in six-figures.

Caleb Plant is living a happily married wife along with his wife. Caleb is married to his longtime girlfriend, Jordan Hardy. The love birds tied their wedding knot on October 5, 2019, in Tennessee. Plant had proposed Hardy after defeating Uzcategui in July 2019. Although This may be the first marriage of Jordan, Caleb was previously married to Carman Briscoe. 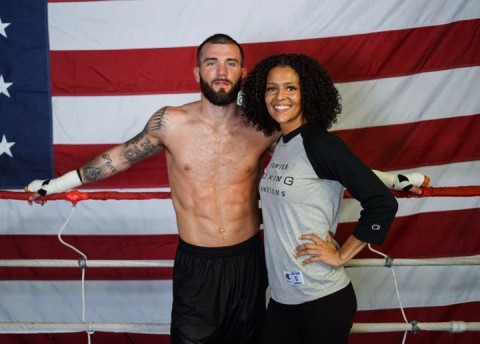 The duo tied their wedding knot in the early 2010s. They had a private wedding ceremony about which there is not much information shared with the public. In May 2013, The love birds welcomed their first child, a daughter, Alia Plant. Alia was born with a rare medical condition. She passed away in 2015 at the month of 19.

After the passing of Alia, Caleb and Carman separated and moved on. After his sad ending, Plant remained single for some time and started dating Jordan and living a happy life with her.

Caleb started boxing at the age of 8. He got a chance to represent his country in his amateur days. He has a record of 97 wins to 20 losses as an amateur. The boxer made his professional debut in 2014 up against Travis Davidson. He won the match in 1st round via a knockout.

In 2019, Caleb got his first shot for the IBF super-middleweight title. He fought against Jose Uzcategui and won the match via unanimous decision. Ever since, Caleb has retained his title in the next three matches and will defend his title up against Caleb Truax on January 30, 2021. He is still undefeated in his professional games.