Caleb Truax is an American professional boxer who held the IBF super-middleweight (2017-18). Also, he once challenged for the WBA (Regular) middleweight title back in 2015. As of January 2021, he had a total of fights of 38, winning 31 of them with 4 losses, 2 draws, and 1 no contest.

Osseo, Minnesota native, Caleb Truax was born on 14th September 1983, under the star sign Virgo. The thirty-seven years old holds an American nationality and is of white ethnic background. He stands 6 ft 1 in (185 cm) tall and has a reach of 75 in (191 cm).

Since Caleb Truax's professional debut on Apr 6, 2007, against Ray Walker, Truax has been active in boxing and has two-three fights in a year. Unlike other athletes,  boxer pays are mostly under the shades. The only disclosed pay of Truax is $300,000, which he pursued after he lost his IBF super-middleweight title against James DeGale via unanimous decision on 7th April 2018 at the Hard Rock Hotel & Casino, Paradise, Nevada, U.S.

Outside the ring, the boxer has a sponsorship deal. He is sponsored by Everlast, Cultivated CBD, Lupulin Brewing Company, and many others. As of 2021, his net worth is approximately $1 million.

Nither single nor married, Caleb Truax is in a relationship with his girlfriend, Michelle Stocke. The couple is together for a very long time and lives together in the house they scored in 2017 in St. Michael. What's more, Caleb and his partner share two adorable children: a daughter, Gia, and a son, Camden. Also, the couple has a four-leg baby whose name is Tito. 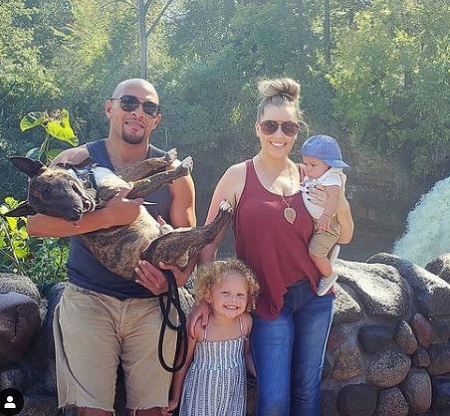 Active on Instagram with over 3K followers, he often shares his family pictures. However, he has not revealed any plan regarding marrying his girlfriend any time soon.

Raised by a single mother, Caleb Truax has a twin sister, Erin Truax, and a brother, Seth Martinez. He describes his background as “humble beginnings, not dirt poor … but we weren’t well off by any means”.

Caleb enrolled at Osseo Senior High School where he was an all-conference member of the Osseo Orioles football and baseball teams. After graduating in 2002, he attended Virginia State University where his gridiron career ended after playing a season due to injury.

In 2003, he returned home and joined the University of Minnesota, and it was there Truax entered a local Toughman Contest at the age of nineteen. Though he lost his first fight, he soon became consumed by boxing—altering his diet and training as he pursued an amateur career.

Caleb graduated from the University of Minnesota majoring in Sociology, minoring in both African American studies and Political Science.