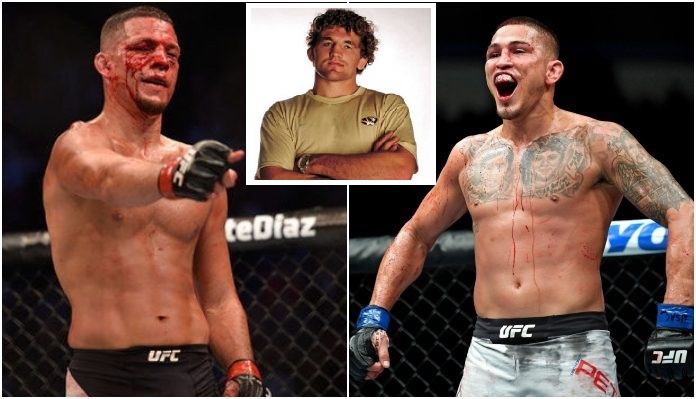 As per Ben Askren, Nate Diaz shouldn't get the exposure he is getting. Despite an underwhelming record and a practically three-year absence from the UFC, Nate Diaz stays a hot topic in MMA circles. For one thing, UFC welterweight Ben Askren realizes Diaz's exposure.

"For what it’s worth, he does a great job making people interested in him. It’s a funny thing because to me he comes off as fairly unintelligent and he says some crazy sh-t"

He went on to add

"Like where he said he’s the king of lightweights. It’s kind of funny. In a little demented way, he believes it even though there’s no way it’s close to actually being true. In the same way that a lot of people do, I find it entertaining and in another way, it’s like holy sh-t this guy is out of his damn mind. He is not a threat in the slightest bit to the welterweight division, I think we’re getting down to the point where he’s just delusional."

This wasn't the only thing Ben said, he went on to give his verdict to his friend and said Pettis will easily win over UFC 241, saying

Nate Diaz is a terrible 170-pounder and that’s all there is to it. Anthony versus Nate is going to be fun. “I think Anthony is going to kick Nate’s ass and I don’t know that will really affect me that much.”

When he faces former lightweight champion Anthony Pettis in a welterweight bout at UFC 241, Diaz will make his first UFC appearance since 2016. Askren thinks that Pettis will easily win the forthcoming bout efficiently.