Andre Johnson is a professional football player who used to play in the National Football League (NFL). He played in the wide receiver position for different NFL teams. He spent most of his career at Houston Texans where he won several trophies too. At the end of his career, he joined Indianapolis Colts and Tennesse Titans but ultimately retired as a Texan player.

In his 11 years career at Houston Texan, he was included 3 times in the First-team All-Pro and 2 times in the Second-Team All-Pro. He was also named the Pro Bowl winner 7 times. In 2008 and 2009, he won the NFL receiving yards leader  For his contributions at Houston, he was named in the Houston Sports Hall of Fame. And Texas also included him in the Texas Sports Hall of Fame.

He played college football at Miami University after which he was picked in the first round and overall in third in the 2003 NFL Draft by the Texans.

Andre Lamont Johnson was born on July 11, 1981, in Miami, Florida, United States. According to the astrologers, his zodiac sign is Cancer.

He was the son of his father, Leroy Richardson, and his mother, Karen Johnson. Though his father is Leroy, he had very less connection with his dad. His parents were separated, and Andre rarely met him He once met him in 2002 only for a few hours. Later, Leroy was shot dead in Mississippi. 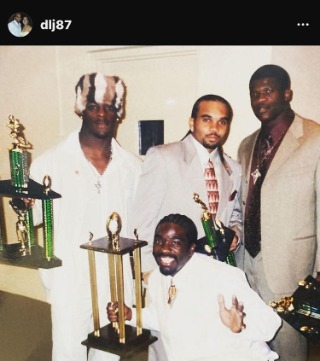 Though he had not a great relationship with his father, he surely remembers him today also. Like that, on Father's day of 2020, he posted his dad's photo and asked some questions and wished him at the same time. It was as,

"I held on to a lot of frustration and anger as a kid because I never understood why you never came around. But as I became older I just wish I could sit and talk with you. But god had different plans. I love and miss you pops. Happy Father’s Day!!!"

He grew up along with his brother in the rough neighborhood of Houston. He has still a very close relationship with his bro and often shares photos with him and his mom together. Andre's brother, nicknamed as PopeSlim is also active on Insta with the username @popeslim.

He is very close with his mother Karen and still lives together with her mom. After her separation from her husband, Karen had to do a lot of hard work, still working as a letter carrier. So, she asked her brother Andre Melton ad Keith Francis to look over her son, Andre, who was just very young. 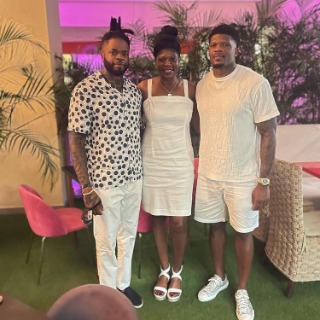 It was his uncle, Francis who used to play high school football at Miami Senior High School who taught him to play football. Francis used to throw balls and teach Andre to catch the ball at just 4 years of age. He was the one who found the talent of Andre as a wide receiver.

And as expected, he also followed his uncle's footsteps and joined the same high school Francis went to.

He has short and black hair. and a black eye. He has a muscular body with which he displays his strength, speed and agility in the field back in the day.

What is the Net worth of Andre J? (Contract and Salary)

As per sources, the estimated net worth of Andre Johnson is estimated to be $30 million. His main source of income is from playing professional football in NFL. He has also earned a big checkout from sponsors and brands deals.

Though the player has never revealed his exact monetary value to the public, he has earned more than 100 million as career earnings. 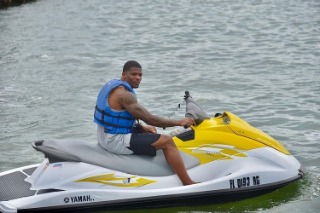 Though he has earned loads of money, he is not fond of cars and luxuries and rarely flexes them in public or social media.

The American wide receiver lives a lavish lifestyle in America and often shares photos of his life on his Instagram.

Read:- Net worth and Salary of Kenny Gainwell

Contracts and Salary as an NFL player 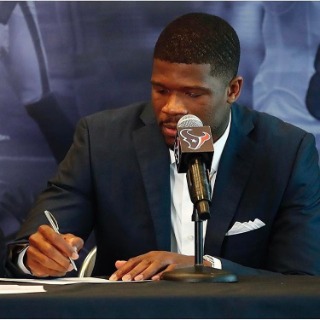 Just after 3 years, Houston increased the contract and renewed their wide receiver's contract to $67 million a year. It skyrocketed his yearly wage to $9,685,714 per year. The contract ending date was at the end of 2016.

But in 2015, he was signed by Indianapolis Colts for a sum of $21 million fr 3 years.  But he spent there only one year and joined Tennesse Titans for the amount of $3 million.

As one of the top players of the NFL back in the days, no doubt, he was offered by some of the major brands and deals. Though we couldn't find any further information regarding who his sponsors were, he still promotes some of them. 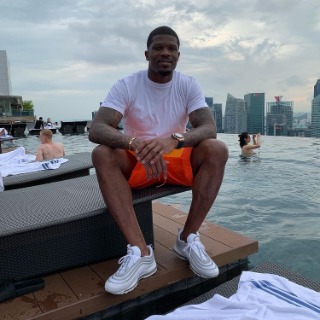 The difference is that he promotes his friend's and family's business. In October f 2021, he gave a shoutout to his nephew's brand named Bet on Yourself. Bet On Yourself is owned by his nephew Dylan Miles and special sells Hoodies and shirts.  He posted,

"Shout out to my little nephew @_thedylanmiles5_ appreciate the hoodie. Good follow his brand @betonyourself_clothing and grab a t shirt or hoodie. #betonyourself"

Read:- How much is Henry's net worth? (Contract and Salary)

Giving back to the community

Andre Johnson has not developed himself as one of the top wide receivers of the NFL. But he is also a helping person helping kids. He especially helps the kids who are grown up by a single parent. Hh, himself was raised by a single mother, so he had an experience of how hard it can be as he closely saw his mother Karen's hard work.

So, he has established the Andre Johnson Foundation in 2003 promising to help the children in need.

In December of 2019, he made some donations to the Madge Bush Transitional Living Center. The sum was $12,000 and he wrote,

"Had a great time at the Madge Bush Transitional Living Center.Me and @deandrehopkins we’re able to bless families this year with some great gifts. Merry Christmas!"

Madge Bush Transitional Living Center is transitional housing for single women aged above 12 years old who are homeless and have 1-2 children. 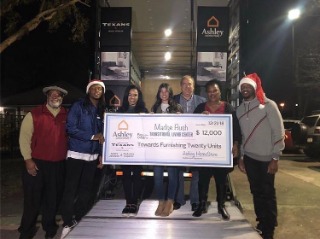 Once, he provided Christmas presents for 800 students of Bastian Elementary School by joining his helping hands with the Houston Police Department.

He has several other charity histories that show him as a helping person.

And he is not the only one in the Johnson family to help by doing charities. Infact, his mother, Karen also won the Houston Humanitarian Award in July of 2018.

The relationship status of Andre J

Andre Johnson is currently not dating anyone and is not in relation with any girls.

The 2 times AFC Offensive Player of the Month is a close person who rarely opens up his dating life to the public. He has neither appeared with anyone in the public nor has shared photos on his social media. 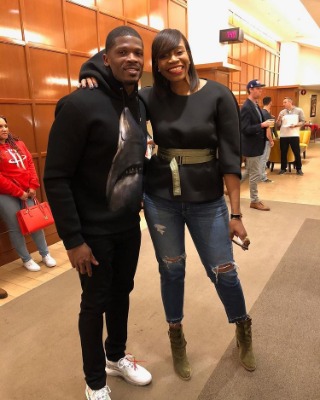 There is no past history of his past relationship and neither is he married. So he is living a single and happy life.

But it is sure that he has had at least one relationship in the past It is not sure with whom was he dating but he was dating a girl in 2010.

Andre J: Father of a children

Andre Johnson is a proud father of a child, a daughter named Kylie Johnson. 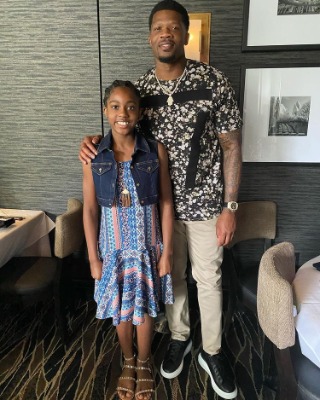 The only player in NFL history with 60+ receptions in his first 8 seasons always wishes her on birthdays every year. On her 11 th birthday on February 6, 2020, he posted,

"Happy 11th Birthday Kylie!!! I love you and wish you many more."

Read also:- Who is Chase's Girlfriend?

Who is the mother of Andre's daughter?

On the birthday post of his daughter, someone said,

"She’s sooooo beautiful! I bet her mom is too"

The same thing is in every fan of A Johnson. Fans who have been following since his time at NFL must have at least wondered who was his wife and who his daughter's mother is. We also tried to extract the information but couldn't find a single piece of information, as the player is very close and has never shared her information on his Instagram So, it is still a mystery who is Kylie Anderson's real mother.

Retirement and Hall of Fame

The 2006 NFL Alumni Wide Receiver of the Year had great respect and commitment to Texans. After spending his last two seasons at Colts and Titans, he wanted to retire as a Houston Texas player. So, he signed a one-day contract with the Houston Texans and retired as their player.

He finished his NFL career with several records. He is the only player in NFL history with 60+ receptions in his first 8 seasons. He is also the player with the most seasons with 100+ receptions and 1400+ yards. He also has the most games with 10+ receptions overall and also in a season too with a count of 7. 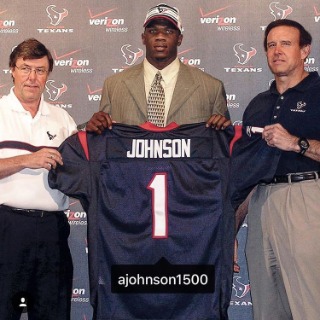 After spending so many years and top of all, giving his all to the Houston Texans, he has established himself as one of the top legends of Houston T.

Being himself one of the top players, he has connections with various celebrities of different genres.

He has shared photos of him with famous singers like Akon and Steve Harvey. The list in his friendship with is other top singers like Jay Z. CAPTION: Andre Johnson with Akon and others SOURCE: [email protected]

Besides, he also never shies to give tributes to top celebrities. He gave tribute to Chadwick Boseman on his death. Also, he also gave his respect to one of the best basketball players Kobe Bryant and his daughter after they died in an accident.

"Sad, tragic loss. It hit hard truly. I felt like I lost family, because he further impacted my love of with his skills. Rest in heaven #BlackMamba #gigibryant"

On his Insta, he frequently shares his time with the family and friends.

He has also given id, so, if anyone wants to talk about business inquiries. The mail id is @[email protected]