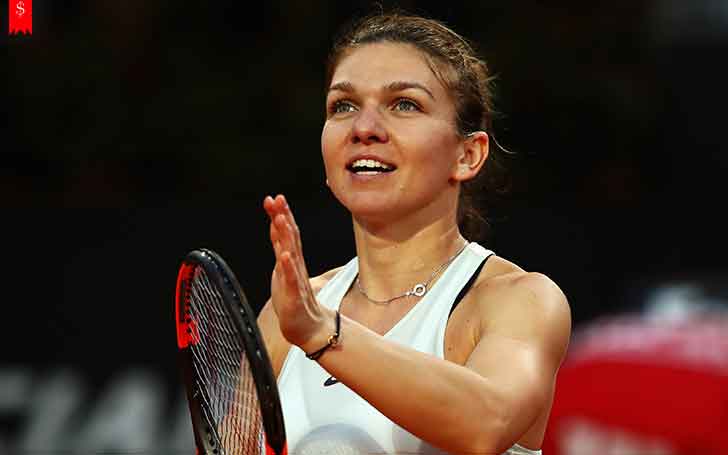 A Romanian professional tennis player, Simona Halep is the current world No. 1 on the WTA Tour. A professional since 2006, Halep won her first six WTA titles in the same year as well as named WTA’s Most Improved Player in 2013. She has competed in various tournaments including Australian Open, French Open, Wimbledon, US Open, Tour Finals, Olympics, and Fed Cup.

The 2018 French Open winning tennis star, Halep has an estimated net worth of around $14 million and her reported annual salary is $2 million.

Simona Halep’s Net Worth: Her Sponsors and Salary

The 2013 Romanian’s top-ranked tennis player, Simona Halep is the active player with the most consecutive weeks within the Top 10 as well as awarded WTA’s Fan Favourite Singles Player in 2017.

Not only name and fame, the enthusiastic player has earned huge wealth through her twelve-years of playing career.  As of 2018, her net worth is estimated to be about $14 million and her total career prize money is recorded at $26,749,597 by WTA.

In 2017, she was ranked at No. 10 in The World’s Highest-paid Female Athletes by Forbes with total earnings of $6.2 million and $4.7 million of winnings, where  Serena Williams, Angelique Kerber, and Danica Patrick was ranked at No. 1, 2 and 3 respectively. However back in 2015, Halep was at No.7th.

Simona Halep Income from Achievements are enlisted below:

Apart from her tennis career, Halep has endorsement and scholarship with renowned brands such as Wilson, Addidas, and many other Romanian brands.

Blessed with the tremendous net worth, Simona Halep is living a luxurious lifestyle. She often visits worlds expensive holiday destination in her vacation as well as shares photos to her 776k Instagram's fan followers.

Halep resides in a luxurious mansion in Constanta, Romania worth $1 million.