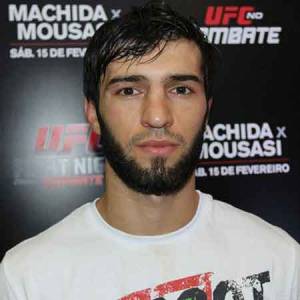 Zubaira Tukhugov is a Russian mixed martial artist who formerly competed in the Featherweight division of the Ultimate Fighting Championship. Prior to joining UFC, he had fought in promotions like Cage Warriors, ProFC and Fight Nights.

Tukhugov has been the subject of various controversies during his time at the UFC. He was suspended by USADA for the use of illegal performance-enhancing drugs. He also attacked Conor McGregor in the octagon following his match against Khabib Nurmagomedov at UFC 229 which resulted in Dana White announcing that he would no longer be fighting for the UFC on 6 October 2018.

Zubaira Alikhanovich Tukhugov was born on January 15, 1991, in Grozny, Chechen-Ingush ASSR, Russian SFSR. There is little to no information available of Tukhugov's early life and his educational background along with is family information.

In 2010, Zubaira Tukhugov made his professional debut and won Pankration Atrium Cup 2 eight men by defeating three opponents. He held a 10-3 mixed martial arts record and was signed by Russian promotion, Fight Nights. He fought three opponents; Romano De Los Reyes, Harun Kina, and Vaso Bakocevic and won all of the matches. He also fought in Cage Warriors and defeated Denys Pidnebesnyi at CWFC 58.

Tukhugov was signed to UFC in December of 2013 and his first fight was arranged to be against Thiago Tavares which was to be held on February 15 o 2014 at UFC Fight Night: Machida vs. Mousasi. Tavares suffering from an undisclosed injury pulled out for the match and Tukhugov faced against the newcomer Douglas Silva de Andrade in his place. Thukugov won the fight with a unanimous decision.

Zubaira Tukhugov faced Ernest Chavez on October 4 and won the match via technical knockout. He was scheduled for a match with Thiago Tavares on June 6, 2015, at UFC Fight Night 68 but the match was canceled due to Tukhugov suffering from a rib injury. Thukugov faced Phillipe Nover on December 10, 2015, winning the match by split decision.

On November 14, 2016, Tukhugov was pulled out of the scheduled fight against Tiago Trator to be held on December 9, 2016, due to a potential anti-doping violation. The allegation turned to be true and he was removed from fights for two years and was fined ten thousand dollars.

In 2018, Tukhugov was scheduled to face Artem Lobov on October 27, 2018, at UFC Fight Night 138 but was removed from the fight due to his involvement in the post-fight with McGregor at UFC 229.

There is no information about Zubaira Tukhugov's personal life. It is not known whether he is currently seeing anyone and has a girlfriend or not. He is not married and does not have a wife or children. There are also no rumors and news of his past love affairs.

Zubaira Tukhugov's net worth for 2018 is unknown. His career earning as an MMA fighter and UFC fighter has not been disclosed and information about his personal assets and annual revenue has also not been identified.