Zaven Collins is a rising American football player. He played American football for the University of Tulsa's Men's football team, Tulsa Golden Hurricane, in the NCAA Division I Football Bowl Subdivision. Collins made it to Unamious All-American in 2020 and also AAC Defensive Player of the Year. He plays as a Linebacker for the team.

Zaven Collins was born on May 19, 1999, in Tulsa, Oklahoma. He is the only child born to Haley Collins. She was only twenty-one when she gave birth to Zaven. Collins rose to fame only after his career as a player so, much information about his early life is under the radar. He graduated from Hominy High School and then enrolled at the University of Tulsa. Zaven stands six feet and five inches tall and weighs over 118 kg( 260 lb).

Zaven Collins played more than half a dozen of sports in his High School. Zaven played track and field, basketball, gymnastics, baseball, Shot put, and American football. He played quarterback, linebacker, and safety in high school. Collins completed his High School career with  4,084 rushing yards with 54 touchdowns and passed for 3,056 yards and 32 touchdowns.

After graduating as a class valedictorian from High School and committed to play for the University of Tulsa, Collins played in 12 games and started 10 in junior year and had 85 tackles, 1.5 sacks, and one interception. Zaven was part of twelve games for the sophomore year and finished the season with 97 tackles and two sacks. In 2019, He made it to the Second-tea, All-ACC.

In 2020, Zaven won almost half a dozen awards, including the Lombardi Award, Bronko Nagurski Trophy, ACC Defensive Player of the Year, and a few more. In early 2021, Collins listed his name for the upcoming 2021 NFL draft. He is among the top prospects for the upcoming draft. Many big franchises are keeping a close eye on him and his performance.

Who is Zaven Collins Dating? Know About His Girlfriend and His Relationship Status

Zaven is an active social media user. He has a minimum fan following but keeps updating his fans with his games and training. He even posts about his hunting. Following his posts, It seems like Zaven is single as of early 2021 or could be secretly dating someone and waiting for the right time to open about his status. 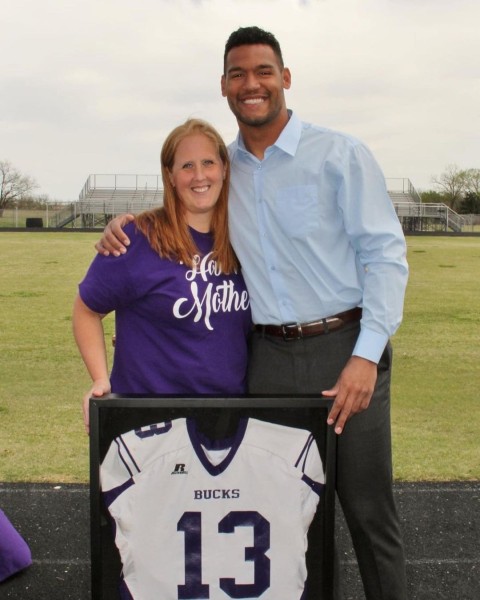 Zaven along with his mother at an event SOURCE: [email protected]_collins

Collins seems to be very much focused on making his good career in NFL. He spends most of his free time training and separates some of his free time from his mother. Zaven likes playing golf and loves going hunting.

How Rich is Zaven Collins? Know About His Contract, Net Worth, and Earnings

Zaven is going to start his professional career. Universities do not pay a penny for the players to represent their team instead provide them with scholarship that helps them t cover their expenses and fees.

The average salary of a rookie player is more than $600,000. Collins will be landing a huge contract with one of the franchises in the upcoming draft.