Trey Lance is a rising American football player. He currently plays as a quarterback for the college football team at North Dakota State. Trey holds the NCCA record for most passes thrown in a season without an interception (287). Lance was named the Most Outstanding Player of the 2020 NCAA Division I Football Championship Game.

Trey Lance was born on May 9, 2000, in Canby, Minnesota. He is among the two children born to Carlton Lance and Angie Lance. His father is a former cornerback at Southwest Minnesota State University and played in the Canadian Football League. Trey has a younger brother Bryce, a senior receiver at Marshall High in 2020–21. Trey stands six feet and four inches tall and weighs 103 kgs (226 lbs).

Trey Lance has been playing with his university team since 2018. As per sources, college players do not receive a paycheck from their university for their games as it is against the NCAA rules. However, they get befefits like accomodation, scholarship, fooding etc.

Lance received an athletic scholarship from his university, So, He must be living a lavish life through his parent's successful career. 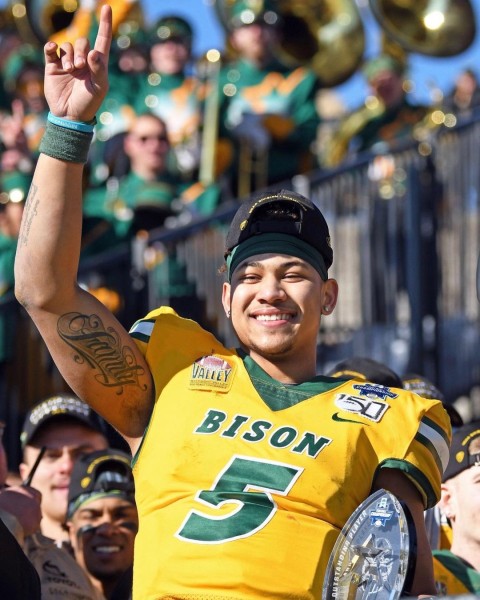 Trey has listed his name for the 2021 NFL Draft SOURCE: [email protected]

Trey is very much early in his career. He has announced his name for the 2021 NFL draft. The minimum annual salary for a rookie active roster player with a one-year contract is $480,000. Lance is ranked among the best quarterback for the 2021 NFL draft. He shall be landing a million-dollar deal in the upcoming draft and Patrick Surtain II and Jeremiah Owusu-Koramoah.

The American football player seems to be single as of 2021. He is an active social media user, and following his posts, Trey is very much focused on his career rather than spending time with people. Lance is very much close to his family. He keeps himself busy training on the ground and with his family.

Canby, Minnesota Native Trey started playing football from a very early age with his fame in his backyard. He started playing as the running back in the early days but later turned into the quarterback. In high school, Lance was a three-star recruit at Marshall High School. After graduating from High School, Trey joined  North Dakota State University to play college football. He was rated as the 8th best player in Minnesota and the best quarterback in the state.

Lance received several offers to play quarterback from  Air Force, Boise State, Northern Illinois, and Western Michigan. In his first year, Lance started all 16 games and won the Walter Payton Award and Jerry Rice Award. The 2020 season got canceled due to the COVID Pandemic. Everybody was expecting him to be part of his University team for the 2021 season, but he listed his name for the 2021 NFL draft. Experts predict that Lance will be picked in the  Round 1 of the draft.