2019 ACC Defensive Rookie of the Year, Gregory Rousseau is an American football player who finished his collegiate career playing for the Miami Hurricanes. He opted out of the 2020 season due to concerns regarding the COVID-19 pandemic and announced for the 2021 NFL Draft.

Coconut Creek, Florida native, Gregory Rousseau was born on 5th April 2000, under the star sign Aries. He holds an American nationality and is of Afro-American ethnic background. Regarding his physique, he stands 6 ft 7 in (2.01 m) tall and weighs 265 lb (120 kg).

Gregory Rousseau enrolled at Champagnat Catholic School where he played defensive end, safety, and wide receiver. Rated as a four-star prospect by Rivals.com, he committed to Miami over offers from Georgia, LSU, and Oregon.

As a true freshman at Miami, he played in just two games before suffering a season-ending ankle injury. The following year, he entered his redshirt freshman year as a backup but eventually took over as a starter later in the season. After recording 15.5 sacks that season, he won ACC Defensive Rookie of the Year. Ohio State's Chase Young was the second in the nation with 16.5 sacks. Further, he earned the First-team All-ACC, Second Team All-American, and Freshman All-American.

Gregory is the son of Anne Rousseau and Oskal Rousseau. His mother is a full-time nurse who works 12-hour shifts at Florida Medical Center in Broward County. Whereas his father is a mechanic who works on ambulances and fire trucks for Miami-Dade Fire Rescue.

Rousseau was raised alongside his elder brothers and It was video games that brought Rousseau and football together.

Gregory Rousseau is in a relationship with his girlfriend of two years, Nina Simone. A graduate of Park Vista Community High School, his bae currently enrolled at North Carolina State University, where she is also playing basketball. 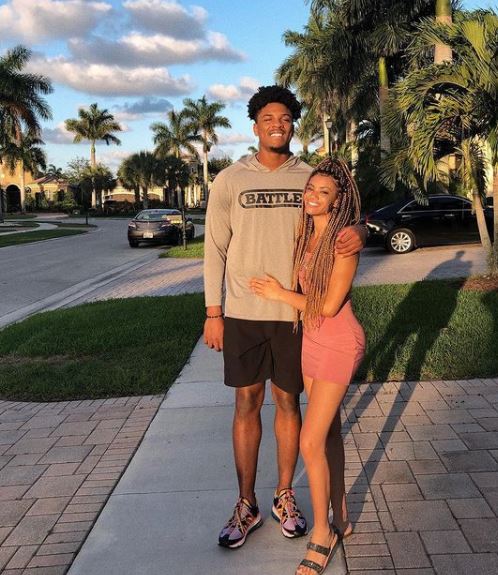 The couple started dating May 2018. Since, every year on 19th May, Greg posts a adorable pictures with Nina wishing her anniversary. Among two, Nina first made their relationship public on 18th October 2018 via an IG post. It reads, "six months with my best friend, i love you".

How Much Is Gregory Rousseau's Net Worth?

Since Gregory Rousseau is yet to turn professional, he has not made money until now from football. As a matter of fact, an athlete at college does not receive a salary playing for the college team. However, there is a scholarship that covers tuition and other expenses.

Gregory Rousseau is one of the most intriguing players in the 2021 NFL Draft. Tony Pauline lists Rousseau as his 18th overall player, a second-ranked defensive end who could be the pick of the New York Jets or Detroit Lions.