Patrick Surtain II is a rising American college football player. He is ranked among the best cornerbacks for the upcoming 2021 NFL draft and is projected to be picked in the first round of the draft. Patrick has been playing football since High School. He is a five-star recruit of the University of Alabama. Surtain won the CFP national championship in 2020 and was SEC Defensive Player of the Year.

Patrick Surtain was born Patrick Frank Surtain II on April 14, 2000, in Plantation, Flordia. He is among the three children born to Patrick Surtain, and his wife, Michelle Surtain. His father is a well-known former American football cornerback who played 11 seasons in the National Football League. He has two siblings Paris Surtain and Parker Surtain. Patrick graduated from American Heritage School and then enrolled at the University of Alabama.

Patrick Surtain has announced his name for the 2021 NFL draft which will be on April 29, 2021. He is expected to be picked in the early in the draft and sign a huge contract worth millions of dollars. Many experts pick him as the best candidate for the Kansas Chiefs cornerback. The average salary of an NFL player is more than $850,000. 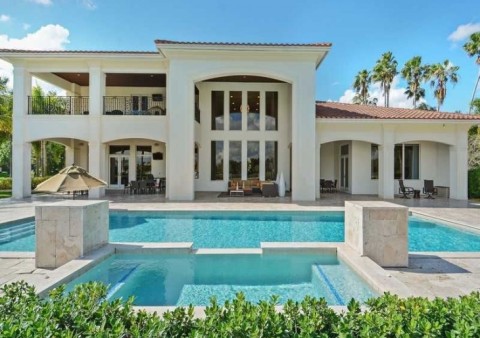 Patrick lives in a $4.5 Million Mansion along with his family SOURCE: Realtor

Surtain played for the University team but hasn't earned any amount so far as college players are not allowed to take money. His father, Patrick Surtain, has an estimated net worth of $10 Million. He earned much of his net worth from his eleven years at the NFL. The family of five lives a happy life in a $4.5 Million Mansion spread over 6,300 square feet bought back in 2001.

Who is Patrick Surtain II Dating? Know About His Girlfriend and His Relationship Status

Patrick Surtain II seems to be living a single happy life along with his family. However, he has not disclosed his relationship status with the public. Although Surtain has a massive fan following his Instagram account, He rarely posts about his personal life.

Patrick is very much early in his career. He could be focusing on his career rather than spending time with people around him. Patrick keeps himself busy training and with his family.

Patrick grew up in an athlete family. He started training as a cornerback with his father. He initially played for his High School and graduated High School with a five-star recruit rating. Patrick was listed in the USA Today High School All-American for two consecutive years of 2016 and 2017. Surtain got numerous athletic scholarships but committed to the University of Alabama.

In his Freshman year, Surtain played in 12 games and recorded thirty-seven tackles and interception. His team reached the 2018 Orange Bowl and was part of the team. In the following season, Patrick totaled 42 tackles, three forced fumbles, eight pass breakups, two interceptions. In the 2020 season, The player earned several pre-season All-American honors like the CFP national championship-winning team, SEC Defensive Player of the year, and numerous other awards.

In early 2021, Patrick was named as the defensive MVP of the 2021 Rose Bowl. He has listed his name for the 2021 NFL draft along with Najee Harris and Trey Lance. He is currently in his senior year.