Wuilker Farinez is a Venezuelan professional footballer who plays for RC Racing Club de Lens as of 2022 and is a goalkeeper. He wears jersey number 1 for his team, RC Lens. RC Lens is a French professional football team that competes in the French first-tier league, League 1. League 1 is one of the top leagues in the world.

Farinez started his young career when he was eleven by debuting on RC Nueva Esparta Soccer Club, based in his hometown. His primary position is the goalkeeper. He is known for his quick saving and intuitive skills. He has won multiple awards playing for several clubs. He has become Venezuelan Primera Division Goalkeeper for seasons 2016 and 2017. He is also the first goalkeeper to score at the FIFA U20 world cup.

Who is Farinez? (Family, Height)

Wuilker Farinez Aray, better known as Wuilker Farinez, was born on February 15, 1998, in Caracas, Venezuela, The 23 year holds Venezuelan Nationality, and his zodiac sign is Pisces. Venezuelan Professional goalkeeper Wuilker has not spoken about his parents and whether or not he has any brothers and sisters. He is a Venezuelan national and holds Venezuelan citizenship. His early education is also not known as of now.

Twenty-three-year-old star Venezuelan football player stands tall and measures 5 feet and 11 inches. He has got good moderate height, and he weighs 77 kg. Wuilker's eyes are black, and his hair is short and black.

How much does Farinez earn by playing football?

RC Len's footballer Wuilker Farinez appeared in the famous and well-known French football club. Consequently, we may say that while playing football for this club, he made a high amount of money. His current market value is 3M Euro, last updated March 23, 2022. His highest market value was 5M Euro on June 21, 2019. 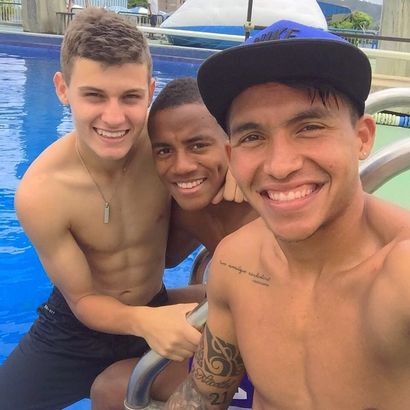 Wuilker enjoying in the pool with his friend SOURCE: [email protected]

According to salary sports, Wuilker's base salary for RC Lens for season 2021-2022 is 280,800 Euro per year, and his weekly wage is 5,400 Euro. He is, without any queries, the highest-paid player in the RC Lens squad. Farinez has a net worth of $4M. He also has a house in Venezuela and enjoys the high things in his life.

Wuilker Farinez is a married Venezuelan football player. He is an extroverted athlete who loves to share his personal life on social media. Farinez is married to a Venezuelan lady.