Herentals, Flanders native, Wout van Aert was born on 15th September 1994, under the star sign Virgo. He is the son of Henk van Aert, and Ivonne Boeckx.Though no one in his family is involved in cycle racing, one of his father's cousins is Dutch former professional cyclist Jos van Aert.

As of 2021, Wout Van Aert has an estimated net worth of $4 million. The Belgian Cyclist has gone from earning a below-market value salary to making more than €2 million per annum.

His deal with Jumbo-Visma ends this season but the team is keen to extend it early and massively increase Van Aert’s salary to secure his services during the peak of his career. Based on other riders' salaries, Van Aert could demand a new salary of at least €3 million per season, making him one of their highest-paid riders in the peloton.

Van Aert was charged a penalty for breaking his contract with former team Verandas Willems-Crelan in 2018 in order to join Jumbo-Visma for the next season. He was ordered to pay €662,000 ($806,000) to his former manager for a breach of contract.

Wout Van Aert is married to Sarah De Bie. The couple started dating back in 2012 and eventually got engaged when Wout finally popped a question on 12th July 2017.

Well, Sarah said Yes and soon the cyclist shared this news with the whole world via his Twitter. He wrote, "I can take on the world with one hand as long as you hold the other #engaged#mrsvanaert#happiestboyintheworld." 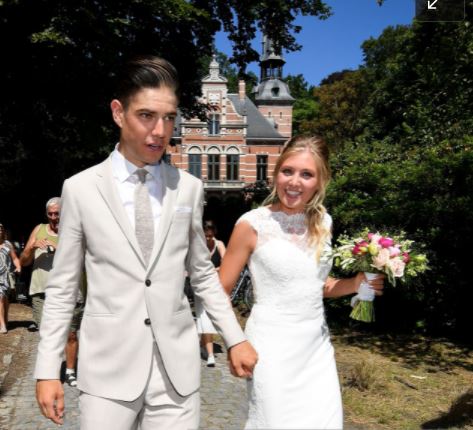 On 4th January 2021, the couple had their first child, a baby boy named Georges.

In June 2019, he won two stages and the green jersey in the Criterium du dauphine, becoming the national time trial champion as well as winning the bronze medal in the road race at the national championship. In the fall of that season, he was awarded Flandrien of the Year.

On 1 August 2020, Van Aert won the 2020 UCI World Tour race. The next week, he won the 2020 Milan–San Remo, both the event was rescheduled due to Covid-19. At the 2020 World Championships in Imola Wout van Aert won the silver medal in both the individual time trial and in the road race.