Manchester City F.C captain, Vincent Kompany is a Belgian soccer player, currently plays as a Centre-back for Manchester City F.C.  and Belgium national team. Previously, he has played for clubs like Anderlecht, Hamburger SV, and Anderlecht, etc. He is one of the best defenders in the world and best known for his good technique, distribution, and accurate tackler.

Not only a thriving career, but Kompany also has a wealthy personal life. He is married and blessed with two children together with his wife. The Kompany family is enjoying the net worth of $45 million.

Net Worth and Salary of Vincent Kompany in 2019

Moreover, he has signed a long-term partnership with Puma to become an ambassador for the German sportswear brand, in 2018. According to the source, he will reportedly earn over UK £1 million per season from Puma as the company continues to back up its reinvigorated push into the market with financial muscle.

Kompany currently lives in a luxurious house in Manchester, the U.K along with his family. He is the brand ambassador for "Warrior Sports & Etihad Airways" through which his net worth is increasing gradually.

FIFA officially announced that Kompany is the ambassador for the Charity,  “SOS Children.” Moreover, he bought the third division club, FC Bleid in March of 2013 with the intention of giving a chance to youth footballers. He also donated a reasonable source of income for the foundation.

Recently in 2019, he announced that he would donate his this season earnings to help the homeless in Manchester. The defender also raised £216,000 for good causes at his testimonial dinner on Tuesday night, with Gary Lineker paying £13k for one of his shirts.

He is married to his girlfriend, Carla Higgs Kompany; the couple got married on June 11, 2011, at Castle Ashby in Northamptonshire, after dating for a couple of years. 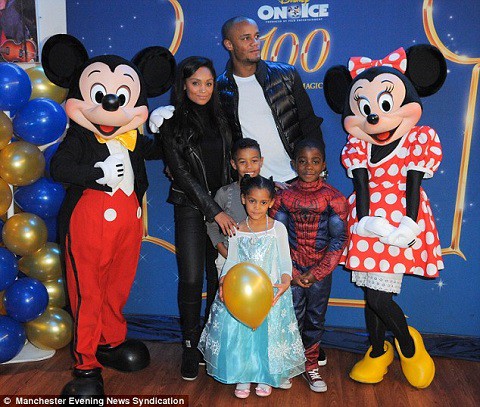 CAPTION: Vincent Kompany with his wife and children SOURCE: Wolexis

Before their marriage, they welcomed their first child daughter in 2010 named, Sienna. Later, they extended their family with the second child son, Kai, born on October 2013. Her wife is a supporter of the Man City. The husband and wife often spotted together in charity functions. On his official Instagram, he has shared pictures with Marcelo; one of the world's best defender and Tottenham Hotspur star, Jan Vertonghen and Bale.

Previously, he was rumored to have an affair with a British model, Anara Atanes.

Vincent Kompany was born on April 10, 1986, in Uccle, Brussels, Belgium with the birth name of Vincent Jean Mpoy Kompany. He was born to father, Pierre Congolese, an immigrant who moved to Belgium and works as a sports agent and mother, Joseline Fraselle. He grew up along with his sibling, Francois, a Belgian footballer, and Christel Kompany.

Besides football, Kompany is interested in politics and gained an MBA degree from the Alliance Manchester Business School in 2018. Kompany holds a Belgian and Congolese nationality and belongs to Multiracial ethnicity, by religion he is Christian. His zodiac sign is Aries.

Kompany began his career with the youth team of Anderlecht in 2000. He has played around three years for the club until 2003; as well as for Anderlecht U-17 and U-19 team. During his youth career, he established himself as one of the best defender and many teams showed their interest towards him.

Kompany then transferred to Hamburger SV with the transfer fee £9.45 million. He was a member of the team that won UEFA Intertoto Cup in 2007. On August 22, 2008, Vincent Kompany signed a four year deal with the Manchester City with the transfer fee £7.65 million and handed the 33 number shirt for the 2008-09 season by the manager, Mark Hughes. His first match came against West Ham United on September 24, 2008, and his first goal came against Wigan Athletic.

11 v 57,000 or nothing. All City fans rest well and be ready for tomorrow. We need you! #ManCity #UCL #Together #NeverGiveUp

Kompany then extended his contract for five years on October 19, 2009, which kept him until 2014. He then took a number 4 Jersey for the 2010-2011 season. He received a yellow card from Andre Marriner in the opening match of Premier League against Tottenham Hotspur.

Later, Kompany's first League match came on February 12, 2011, against Manchester United. He then captained the team in the absence of Carlos Tevez against Balckburn Rovers. Later, he was named as a club captain for the 2011-2012 season. On his captaincy, his team won the League Cup Final opposite Sunderland 3-1. So far, for the team, he has scored 18 goals in 265 appearances.

Vincent Kompany has represented his national team in Belgium U-16, and U-17. He played 3 games for U-16 and 2 for U-17. At the age of 17, he earned his first international caps in February of 2004 against  France, making him one of the youngest players ever.

Kompany was also called up for the 2008 Olympics but he didn't appear.  He captained the international team on November 10, 2001, against Romania. Due to his injuries, he didn’t give his appearance for the UEFA Euro 2016. Till the date, he has earned 87 caps, scoring 4 goals for his national squad.