Carlos Tevez is a former Argentine national team player and international footballer who had an illustrious career playing for both Manchester Clubs and Italian giant Juventus F.C. He currently plays as a striker for Argentine professional club Boca Juniors.

The thrity-five years old is married and has three children. Further, his net worth in 2019 is approximately $28 million.

How Much Is Carlos Tevez Net Worth In 2019? Know His Contract and Salary

On 12 September 2009 Manchester City came up with a record British transfer fee of $65 million which is still debatable.  Carlos Tevez signed the contract and received around $200 thousand per week earning the annual salary of $10 million.

As 2013 saw Carlos joining Juventus F.C. for a reported $20 million transfer which included separate bonus along with his salary. His salary during that time was reported to be $125,000 in a week comparatively less than he earned in Manchester City.

When Carlos moved to China he was the highest-paid footballer in the world with a salary of $48 million annually making the income of $820,000 from salary in a week

With such a successful career, Tevez enjoys a net worth of $28 million and enjoys a lavish yet normal life. He also makes more than a million from endorsement deals with several brands. He owned a mansion England worth $3 million which he put on sale 2015.

He also owns an impressive car collection. Some of the cars in his garage are Porche, Audi R8 V10, BMW, Wrangler, Range Rover, collectively worth millions.

Tevez has had many rumors and controversies along with his career and personal life whether it was his dispute with the club managers or his open relationship with 19 years old actress Brenda Asnicar in 2010 already had a girlfriend. The affair lasted for about a year. 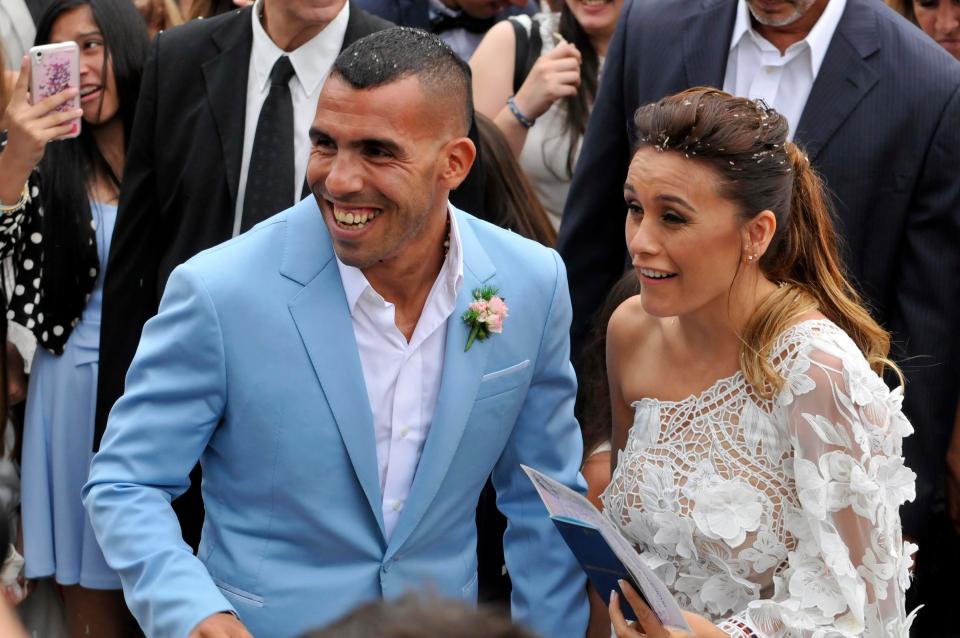 Tevez finally got married to his long-term girlfriend Vanesa Mansilla in San Isidro on 22 December 2016. Both of them already had a daughter Florencia and Katie before their marriage. Later the couple welcomed their third child, a son Lito Junior Tevez.

Tevez and Vanesa knew each other since Tevez was 13 and had an on and off relationship since then. He left Vanesa and dated an Argentine model Mariana Paesani back in 2008 and was rumored to have dated model Natalie Fassi in 2004.

Carlos Alberto Martínez Tevez was born on February 5, 1984, in Ciudadela, Buenos Aires, Argentina. Though his biological father and mother are Juan Alberto Cabral and Fabiana Martinez, Tevez was adopted by his mother's sister Adriana Noemi Martinez and her husband Segundo Raimundo Tevez from where he got his surname.

Tevez grew up in a neighborhood full of crimes and drugs, as well as a high crime rate. So, his parents gave him an early start to the football because it was the only way out of all the bad influence surrounding his hometown and for his love and dedication towards football he was given the nickname of El Apache.

Playing for the All Boys U-20 in 1996 he was scouted by Boca Juniors and seeing his talent on the field he was signed by the club at age of 16. He made his debut against Talleres De Cordoba on 2001 -2002 Argentine Primera Division.

Career Highlights of the International Player

During his time at Boca Juniors, Tevez was linked being the next potential heir to Diego Maradona,  whose famous number 10 shirt he had inherited at the club.

Tevez moved to Seria A team, Corinthians in January 2005 for a record deal in South American Football where he captained the squad and was named best player by the Brazilian Football Confederation.

On 31st August 2006, Tevez confirmed his move to West Ham United where he made his debut playing for Aston Villa on a 1-1 draw as a substitute and he made his first start under the new manager Alan Curbishley in a 3-0 FA Cup victory over Brighton and Hove Albion.

During his one season at West Ham in 2006/07, Tevez endeared himself to Irons’ fans by scoring seven goals in their final ten games.

Manchester United came calling for Tevez and put forward a 2-year loan deal on 10 August 2010, and he scored his first goal for the club against a 2-0 win over the rival club Chelsea. He was permanently signed by Sir Alex Ferguson and soon made his mark on the club alongside players like Wayne Rooney, Ryan Giggs, Rio Ferdinand, and others.

Carlos Tevez scored many important goals in his United career winning premiere Leauge titles and Champions Leauge but he was not satisfied as the club did not renew his contract.

On 6 January 2007, Tevez made his first start as a substitute for West Ham under the new management of Alan Curbishley in a 3–0 FA Cup third-round victory over Brighton and Hove Albion.

Teves signed a deal with his fierce rival club Manchester City on 14 July 2009 at record transfer fee. He scored his first goal on27 August 2009 against Crytal Palace with a 2-0 victory, Tevez later replaced then club captain Kolo Toure on 18 August 2010 under the manager Roberto Mancini.

The former City captain joined Juventus F.C. on 26 June 2013, who assigned Tevez with the number 10 jersey and made his first debut in Serie A scoring a winning goal. After spending 2 seasons with the club Carlos returned to his first club Boca Juniors before leaving for Chinese Super League on 29 December 2016 only to return at Boca Juniors in 2018.

Awards and Achievements of Carlos Tevez

The quick, powerful, hard-working and versatile forward had much success over his career from winning the Gold Medal at 2004 Olympics and has made appearances in 2 World Cups and Copa America. In his illustrious club record.