Marcelo Vieira is a Brazilian footballer currently playing for the Spanish club, Real Madrid and also plays for the Brazil national football team as a left black. He played for the youth academy of Fluminense and started his professional career with Fluminense in 2005.

Marcelo is married to Clarice Alves since 2008 and the couple is the parents of two children. He is estimated to have a net worth of $16 million in 2019.

Marcelo Vieira Net Worth and Salary

His weekly wage during the 2014 season was reported to be £65,000. Marcelo received £2 million as a bonus after winning the Champions League.

Marcelo also receives a reasonable sum of money from his product endorsements with Adidas and Fly Emirates. He reportedly pockets about $5 million yearly from the deal.

He has a black Audi car, worth $55,000. He receives £100,000 weekly wages from his current club and has a net worth of 16 million euros. Currently, Marcelo resides in Madrid. A Real Estate Property worth around $1.9 Million which he bought in 2016.

With a tremendous net worth, Marcelo is living a lavish lifestyle. He often visits words expensive holiday destinations during his vacation together with his family and friends.

Marcelo married girlfriend, Clarice Alves in 2008. She met Marcelo through her brother when they were 15. 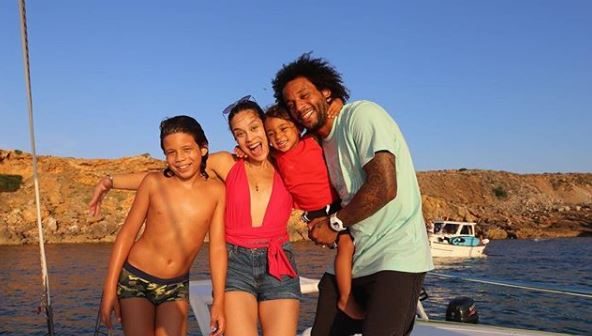 Clarice is an actress by profession. She has also practiced and is experienced in Muay Thai.

The couple has two sons named Enzo and Liam. Their first child Enzo was born in September 2009 while the second child, Liam was born in 2015.

Since 2008, the couple is living a blissful life. The pair celebrated nine years of togetherness. To this date, there isn’t any news or rumors that might lead them to divorce. Clarice was also in Moscow during the FIFA World Cup 2018 to support her husband.

Marcelo belongs to the white ethnicity and holds a Brazilian nationality.

At the age of nine, Marcelo started playing futsal. Marcelo Vieira began his football career with a Brazilian sports club, Fluminense F.C. as a junior for three years.

Later, Marcelo promoted as a senior in 2005. He won the Campeonato Carioca with his team in 2006. For the team, he gave 30 appearances and scored three goals. In the same year, he left the team.

Marcelo joined Real Madrid in 2007, signing for $8 million. Then, on 7th January 2007, Marcelo debuted as a substitute against Deportive La Coruna.

In 2010, Marcelo won millions of hearts by showing his attacking flair and defensive skills. To this date, Marcelo has played 11 seasons with the club, scoring 28 goals in 408 matches.

With his team, Vieira won the Olympic Silver medal in 2012, Olympic Bronze Medal in 2008 and FIFA Confederations Cup in 2013. From a promotional event at the Bernabeu Store, Marcelo was revealed as one of the Adidas' new icons for 2013.

His teammates in the Brazilian team are Neymar, Philippe Coutinho, etc.