Uriel Antuna is a professional footballer who plays for Liga MX club Cruz Azul as a winger. He wears jersey number 7 in his current team. Antuna also plays for the national team of Mexico and has been playing for the senior team since 2019.

Born on August 21, 1997, Antuna won the 2019 CONCACAF with the team. Gomez Palacio, a Durango native, holds Mexican nationality and belongs to a mixed ethnic background. Antuna was raised by his supportive parents, Carlos Antuna and Berta Alicia Romero.

Details on Uriel Antuna's Net Worth and Salary

Antuna is estimated to have a net worth of around $300,000. All of his income came from being a professional footballer. Antuna earns £11,000 weekly, while his yearly income is £572,000. Antuna is still active in this sport, and his income will rise. Before coming into his current team, Antuna also played for Chivas. His deal with Chivas was €9.90 million. Antuna's market value is €4 million, but it is not his highest value. His highest value was €5 million, which was recorded on January 10, 2020.

Currently, Antuna works with Nike, and through his brand endorsement, Antuna makes a decent profit.

Antuna Has Two Children With His Wife, Penelope Garcia

Antuna is a married footballer whose wife is Penelope Garcia. Like many couples, Garcia and Antuna dated each other before tying the knot. Since then, they have lived happily as a husband and a wife. Meanwhile, the married couple is also blessed with two children. 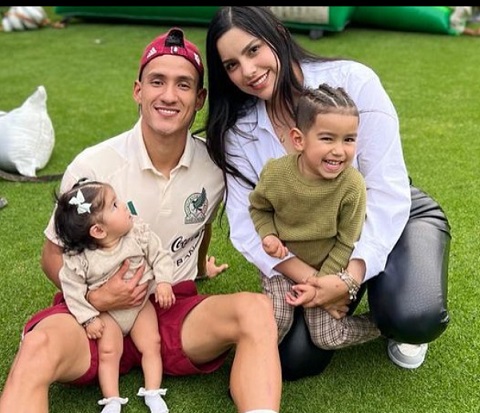 Their first child, Bruno Antuna Garcia, was born in January 2020. Later, the couple became parents for the second time after welcoming their second child, a daughter whose name remains a mystery. Moreover, the family of four lives happily, and we can explore their life by following the footballer on Instagram as @urielantuna90.

Both his parents are supportive of his football career. When asked about his mom in the interview, he replied, "She is crazy! She used to bang on the drums in the stands during my games."

Take a Look at Antuna's Career

After playing in Santos Laguna's youth system through U-15, U-17, and U-20 teams, Antuna was promoted to the first team in 2017. On March 5, he made his professional debut in a 2-1 loss to Pumas UNAM, coming as a substitute. Uriel Antuna in one of his professional games  SOURCE: Instagram @urielantuna90

On July 12, 2017, he was signed by Manchester City on a four-year contract. Further, he was loaned out to Groningen for the 2017-18 season. Moreover, for the 2019 season, he joined MLS side LA Galaxy on loan and is currently signed to Liga MX club Cruz Azul.

At the international level, Antuna played for Mexico U-20 and Mexico U-21 teams. Currently, he represents Mexico's national football team, where he teamed up with Guillermo Ochoa, Hector Moreno, and Edson Alvarez. He made an international debut on June 5, 2019, in a friendly against Venezuela, as a 68th-minute substitute for Roberto Alvarado.