Darren Till, nicknamed as The Gorilla is a British Mixed Martial Arts Fighter as well as Mulay Thai fighter who is currently competing for American renowned MMA promotion,  Ultimate Fighting Championship in its Welterweight category.

He made his professional MMA debut in 2010 and has a record of 17 wins, 1 loss and a draw in his 19 professional MMA matches so far in his career. To know about his early life, career, net worth and personal life, keep scrolling.

Darren Till was born on 24 December 1992 on Liverpool, Merseyside, England. The white caucasian fighter is of British nationality.

He started his Muay Thai training at the tender age of 12 and turned pro at 15. To further enhanced his skill, he took further training under Team Kaobon at the age of 17.

He spent his early career in San Catarina, Brazil and competed in a couple of matches as an amateur fighter before becoming a professional athlete.

Till signed officially with UFC IN 2015 and took on Wendell de Oliveira Marques in his UFC debut match at the event, UFC Fight Night: Condit vs Alves on May 30, 2015.

He won his debut match via KO in the second round of the match. Till later face off against Nicolas Dalby on UFC Fight Night: Holohan VS Smolka on 24 October 2015. The match ended in a draw and both the combat was given Fight of the Night award for their performance. He has defeated fighters like Jessin Ayari,  Stephen Thompson and Bojan Velickovic.

After compiling several outstanding victories at the UFC arena, he took on Donald Cerrone during the UFC Fight Night 118 on 21 October 2017. He emerged victorious with a TKO in the first round and also fetched him the Performance of the Night award.

The British MMA star, Darren Till stands at a height of 6 feet 1 inch tall and weighs 77 kg. In addition, he has 74 inches which he uses efficiently during his matches.

It is reported that he has a girlfriend and has a daughter in Brazil and is expecting another child with her in 2018. According to the news as of August 2018, his girlfriend is already 8 months pregnant with his unborn child. The two are yet to get married.

To honor his love for his girlfriend, he has also carved out a tattoo on his left arm of the mother of his child as a birthday gift. He has also seen a fair deal of controversy as he was once was featured in the stabbing incident after a fight with a couple of patrons and bouncers in a party that happened in August 2012 in the UK. 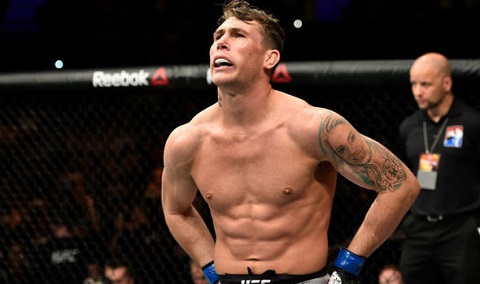 CAPTION: Darren Till with a tattoo of his girlfriend SOURCE: Daily Express

After this incident, his coach advised him to shift to Brazil to continue his training and career. Furthermore, Till has been involved in an angle with the controversial Brazilain politician, Jair Bolsonaro with whom he endorsed for 2018 Brazilain presidential campaign.

Darren Till Net Worth

He has been successful in his MMA thus far and has collected wins and fame form his MMA professional career. As a result, Darren Till has earned a good sum money through his wins and impressive performance that he displays in his matches.