TJ Hockenson is a professional football player from America who plays in the National Football League(NFL). He plays in the football tight end position for the NFL team Detroit Lions. Lions drafted him in the first round and 8th overall in the 2019 NFL Draft. He has been playing for the team since then. On his debut for Detroit, he recorded six receptions for 131 receiving yards which was the most in the NFL by a tight-end debut.

In 2020, the Detroit Lions number 88 was named in the Pro Bowl for his outstanding performance that year. He played his college football at Iowa where he was awarded John Mackey Award in 2018. that year, he was also included in the First Team All-Big Ten and. And he was named Kwalick-Clark Tight End of the Year in 2018.

Thomas James Hockenson was born on July 3, 1997, in Chariton, Iowa, United States, and his birth sign is Cancer. He is American by nationality and his ethnicity is Black. His father's name is Ted Hockenson, and his mother's name is Tori Hockenson.

He is very close to his mother and is often praised for her contribution to what he is right now. 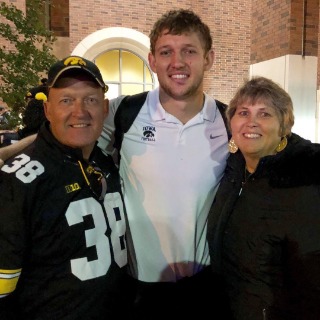 T Hockenson with his father and mom SOURCE: [email protected]

He was raised along with his two older brothers Andy and Matt Hockenson with whom he used to train in his early years.

He attended Chariton High School situated in Chariton where he used to play both football and basketball. He set the school records for receiving yards in a game and was awarded a four-year letter winner as a tight end. 247  Sports, rated him as the 3-star recruit in the class of 2016.

He went to the University of Iowa in the US and played for Iowa Hawkeyes in college.

What is the Net worth of TJ? (Contract and Salary)

As per sources, the estimated net worth of TJ Hockensoon is estimated to be $12 million. He earns a massive amount from playing football for the Detroit Lions. 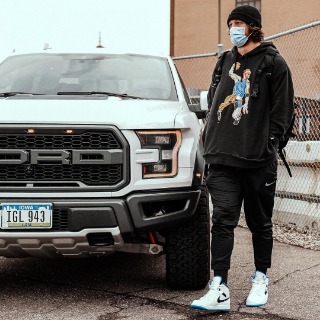 According to sportrac, the Detroit Lions tight end signed a 4-year contract worth $19,821,225 with Lions in 2019 after getting drafted by them in the first round. It includes a guaranteed signing bonus of $12.4 million. He will pocket $4 million per year that including his base salary of around $800,000.

He lives a lavish lifestyle with his partner and often shares photos of his life and luxuries on his Instagram. He sometimes flexes his multiple cars on his social media.

Besides, football, the 2018 John Mackey Award winner is also involved with various sponsorships, and organizations. He sometimes posts about his sponsors and gives them promotions. 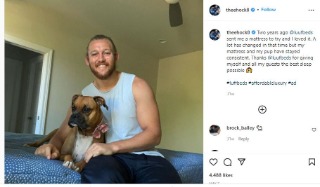 One of his sponsors is Luuf Beds which is a manufacturer of handcrafted beds materials. TJ uses their mattress and even gave a shoutout to them saying,

He is also associated with the organization named We are Warrior Rising which is a non-profit US Veteran Service Organization. It is highly based on empowering America's Veterans.

According to TJ, the inspiration for him joining the organization is his grandfather who was a veteran back in the day.

Read also:- What is the Net worth of Mikkel Hansen?

Who is TJ dating? His Girlfriends and Love Life

As of 2021, it is not sure former Iowa's tight end is currently in a relationship or not. He has never shared photos about his date on his Instagram except one photo of him dancing with a girl. The girl's identity is not verified yet. So, we assume he is dating that girl but his fans have to wait for a little more to find more about his current girlfriend's information.

Read also:- Who is Kenneth's Girlfriend?

Are TJ and Carley still dating? Have they broken up?

But, previously, TJ Hockenson had an open relationship with his ex-girlfriend Carley Arnold. The couple met in 2015 during their high school years and dated for a few years. The last time the couple shared photos together was on March 1, 2018, where they were seen hugging and laughing together. Carley A. even wrote a caption saying

"What would I do without you?"

Since then they have never shared any photos with each other and not appeared in any event too.

As famous as Hock is in football, his former partner Carley is also a famous model who won the Miss Iowa Teen USA in 2017. She posted saying,

" I am incredibly thankful for this whole experience. Who knew that my life could change so much in just one weekend? I am very proud to say that I get to represent Iowa as Miss Iowa Teen USA 2017!"

TJ's previous love Carley is also active on Instagram and has more than 7,000 followers. She frequently posts about their time together on her social media. 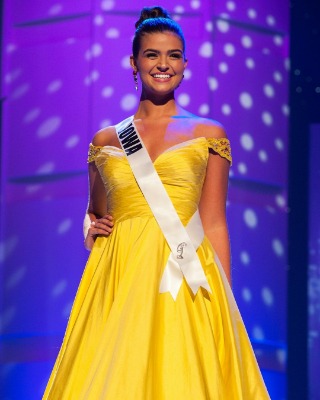 As her Instagram, she is currently dating Matt Umland and shares photos with him. She even posted her caption saying

"Love you more than you love cowboy boots and new hats."

So it seems, TJ and Carley have broken up already.

His username on Twitter is @TheeHOCK8 and has followers of more than 31,000 followers.

Similarly, on Instagram, he goes by the username @theehock8 and has more than 91,000 followers. There he frequently posts about his games, workouts, personal life and time with family.

He has also mentioned a mail for business inquiries [email protected]