Sometimes fame comes to you just because your name is linked to a famous personality. The same happens to Tiana White who often hits the headline whenever the public questions about New Orleans Pelicans' Zion Williamson love life. Yes, you guessed it right, the two are in a relationship. In fact, they are high school sweethearts.

Read this article and get to know Tiana White closely and her relationships with NBA Power Forward, Zion Williamson.

Aforementioned, Tiana White and Zio Williamson, 21, are in a relationship. The speculation about White come to the light when she appeared as the prom date of Zion Williamson while students at Spartanburg Day High School. At the time, she was a junior while the basketball player was a senior.

With long-distance separating them in college and then New Orleans Pelicans, how is their relationship going?

The long-distance is one thing, but she is nowhere on Williamson’s social media: Instagram or Twitter posts. This could be because they trying to keeping their lives as private as possible. But what about not following White on Twitter, and screenshots show that they were previously following each other. 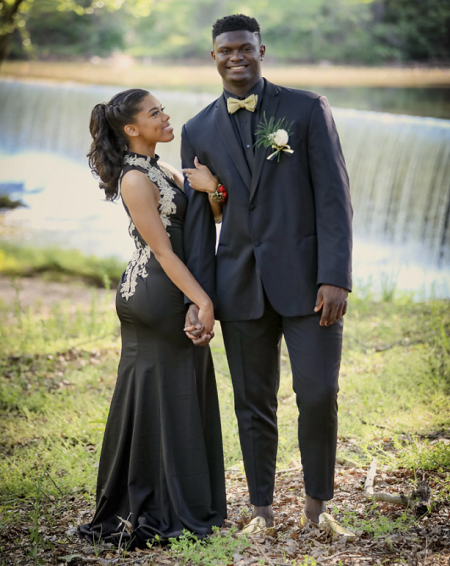 The last woman to appear on Zion's Instagram was Disney Channel actress Peyton List. However, there was no lovey-dovey scene. Nevertheless, the basketball player has deleted all posts with White.

The speculation will continue on White and Williamson's relationship life until he makes a public appearance with White, or someone else.

Born and raised in South Carolina, Tiana White holds an American nationality and is of Afro-American ethnic background. She attended the Spartanburg Day School, graduating in 2019. At school, she was a member of the cheerleading squad, as well as volleyball and track and field teams.

Currently, she enrolls at Wofford College. On her IG bio, she has written herself a photographer.

Tiana White is a college student and a self-proclaimed photographer. Don't know if she is professional or not, but the median salary of a photographer in the United is $45,000.

On the other hand, her boyfriend, Zion Williamson, an American professional basketball player who is signed to the New Orleans Pelicans of the National Basketball Association (NBA) has a 3 year / $30,736,320 contract. He was picked by the team in the 2019 NBA Draft in the round with 1st overall following a collegiate career at Duke.